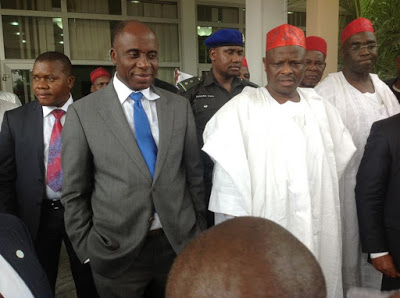 As Nigeria’s main opposition party, the All Progressives Congress, APC approaches its September primaries, there are reliable indications from within the party, of Rivers state governor, Rotimi Amaechi emerging the party Presidential candidate with his running mate being Kano state governor, Rabiu Kwankwaso. Lagos state governor Raji Fashola is also considered for the vice position.

Powerful sources within the party confirmed to this likely combination, however NewsRescue was unable to get comment from the party spokespersons.

The Rivers state governor, Rotimi Amaechi, tipped for the Nigeria’s #1 spot, has been one of the most aggressive Nigerians of all calibers campaigning against the status quo in Nigeria. A pioneer of the opposition movement, and the victor and chairman of the Governor’s forum, he is seen within the party as a strong and effective alliance builder and an individual whose character resonates with the poor and rich, north and south. It can be recollected the roles he played in the Emirship of Sanusi Lamido Sanusi, as well as the fear the current president has for him as illustrated by him being barred from entering Ekiti state as an only means for the ruling party to purchase a victory in the state.

Governor Rabiu Kwankwaso of Kano is an APC party governor with an outstanding record against corruption, including setting up direct text-to-his-phone monitoring of all transactions in his ministries, and his other recognized qualities which importantly include his ability to transform Kano state and maintain security in the north’s most populous state. Party members believe he wields considerable respect among Nigerian voters, most especially northern and would commander the north Muslim and Christian vote as a Vice Presidential candidate.

Lagos state governor, Raji Fashola is also a contender for the Vice presidential slot. Governing over Nigeria’s busiest and most industrious state and a population of approximately 1/5th of Nigeria, governor Raji Fashola’s strength and new generation vision is seen as a great selling point for APC. Party thinkers believe Fashola can easily commandeer young voters across the nation and can also deliver the northern vote.