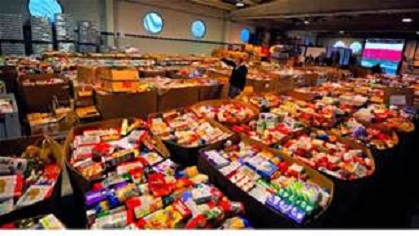 The Governor Ben Ayade administration says they have budgeted the sum of N1.7 billion for the establishment of a Food Bank Commission in the state. The governor made this known while receiving a delegation from HB Heritage Bank led by its Coordinator of the Home Grown School Feeding Program, Mr. Godwin Ukwat on a courtesy visit in his office in Calabar, Monday.

Ayade said the food bank commission is structured in a manner that each Local Government will have a Director.
He expressed the willingness of the state government to key into the Home Grown School Feeding Program on the condition that it is given the free hand to run it.

He said the practice of agriculture in the country was still at the subsistence level, stating that it was time the country embraced the use of technology in farming, adding, ”we are at a time where agriculture is driven by technology in developed countries; where farming is in the hands of big farmers and infrastructure such as roads, water and power are provided.”

The governor argued that it will be counterproductive to encourage farmers to continue with “stone-age” agricultural practices which do not even provide insurance cover for the farmers.

Earlier, the HB Heritage Bank, Head of Agric-Finance, Mr. Gbenga Awe said the home grown school feeding program is one of the social safety nets of the Federal Government, which seeks to employ 300,000 youths in the country.

He pointed out that the program is meant to feed school pupils from Primary One to Six with the aim of encouraging learning, asserting that it is usually difficult for a child to concentrate and learn with an empty stomach.
Awe further explained that the scheme will be funded on the basis of 60 percent for the federal government and 40 percent for the state governments.

Continuing, he outlined the benefits to states to include a boost to Internally Generated Revenue as it bringing a large population of persons from the informal sector to the formal sector thereby expanding the state access to the tax base.
He listed states that are already signed on to the program to include, Kaduna, Zamfara, Osun, Oyo, Jigawa, Benue and Enugu States.