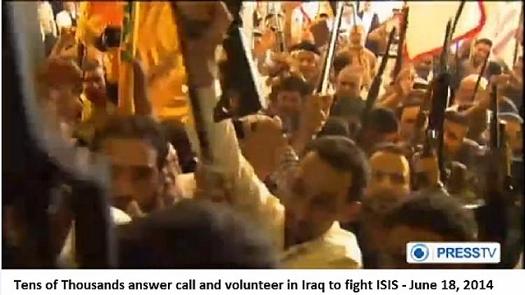 Iraqi army forces backed by thousands of volunteers have pushed ahead with their campaign against Takfiri ISIL militants in several areas of the country, inflicting losses on the terrorists, Press TV reports.

On Saturday, the Iraqi military successfully thwarted a militant attack on the Baiji oil refinery, located 180 kilometers (112 miles) north of the capital, Baghdad, following heavy clashes with ISIL terrorists near the facility.

Baiji refinery is Iraq’s largest and produces a third of Iraq’s oil output. It has been the scene of a week of fighting between Iraqi forces and Takfiri militants.

The ISIL transferred its wounded members to the Baiji hospital, where local citizens were forced to donate blood to the injured militants.

Moreover, the Iraqi army has confirmed that 127 militants were killed following airstrikes in the provinces of Salahuddin, Nineveh and al-Anbar.

“It is obvious that the (Iraqi) army is now advancing. We all know that the militants are strong and very well-equipped, therefore, fighting them needs a lot of effort,” Jasim al-Moussawi, a political analyst, told Press TV.

The ISIL Takfiri militants took control of the city of Mosul on June 10, vowing to continue their raid towards Baghdad.

Soldiers of the Iraqi army have been engaged in heavy fighting with the militants on different fronts and have so far been able to push back militants in several areas.

Iraqi Prime Minister Nouri al-Maliki has said Saudi Arabia and Qatar are responsible for the security crisis and growing terrorism in his country, denouncing the Al Saud regime as a major supporter of global terrorism.