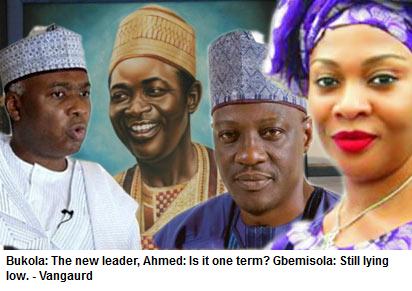 Could it be part of the mischief that flows in the political arena? The report that Governor Abdulfatah Ahmed of Kwara State is about to ditch the All Progressives Congress, APC for the Peoples Democratic Party, PDP is being flayed by his associates and aides as a deliberate mischief aimed at undermining the political harmony in the State of Harmony.

The heart of the report is that Governor Ahmed in his desperation for a second term could ditch the APC for the PDP on account of the alleged hesitance of the political leader of the state, Senator Bukola Saraki to allow the governor go for a second term.

Remarkably, Senator Saraki has not been known to have made a comment publicly or privately on a second term for the governor. In the heat of the 2011 campaigns, the former governor was reported to have said that his successor would serve only one term. Saraki spoke on the basis of strength and his position as the political leader of the state.

Indeed, despite recent efforts by the Peoples Democratic Party, PDP to assert itself on the Kwara political turf, few doubt that Kwara State remains under the firm grip of Bukola. Bukola like his father, the late Senator Olusola Saraki, remains one of only about three senators to have successfully installed a governor in his home state.

Other senators to have done so include the late Senator Olusola Saraki in Kwara and the late Senator Usman Albashir in Yobe State. Since the inauguration of Governor Ahmed, one of his trusted lieutenants while he himself was governor, Saraki has largely remained aloof on the issue.

However, associates of Saraki have in the past privately spoken of Bukola’s inclination to support Ahmed for a second term based on what some claim as his relatively successful stewardship of the state thus far. But would Bukola go back on his word?

Whatever are the intentions of Senator Bukola, Governor Ahmed it seems, is not one inclined to go into battle with his political leader. The governor, apparently may have learnt from the mistakes of past governors who walked away from the relationship they had with Bukola’s father.

Reacting to the report of his alleged romance with the PDP, Governor Ahmed said the report as provocative, contemptuous and wholly false.

Ahmed who spoke through his Chief Press Secretary, Alhaji Abdulwahab “Ordinarily, the allegation, peddled by people with devious intent, does not deserve a response as the objective is obvious. However, we need to alert the good people of Kwara State to the desperate ploy by selfish people with sinister political interest to cause disaffection and stir anxiety in the populace.”, the Governor said.

Taking a jab at the opposition party, Ahmed said: “Assuming without conceding that Gov. Ahmed wanted to return to PDP, which faction of the rudderless and visionless  party would he have  negotiated with?”, the statement queried.

“For the record, our decision to leave the PDP was premised on the need to build a new nation where every citizen has the opportunity to prosper, in which our youths are productively engaged and where the disadvantaged are assisted to live a decent life”, the Governor said.

“For the avoidance of doubt, the relationship between His Excellency, Gov. Abdulfatah Ahmed and the former Governor and Leader of the APC, Dr. Bukola Saraki,  remains cordial, warm and solid. It is equally ludicrous that they allege that the governor was on a save my soul mission to his brother governors in the APC as well being one of the earliest visitors to the new National Chairman of the PDP.

Gov. Ahmed has no need for such visits neither has he embarked on any. For him, the task is the actualisation and fulfillment of the covenant he entered into with Kwarans during the last elections as encapsulated in the Shared Prosperity Programme of his administration.”