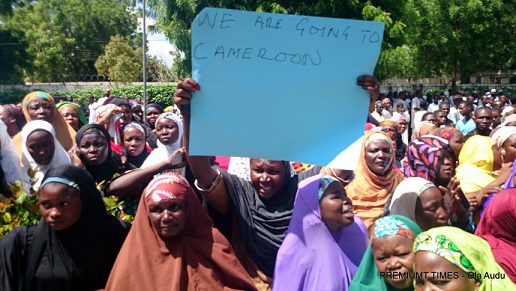 About 1,000 people embarked on a rally in Maiduguri, Borno State, on Saturday to protest what they said was their abandonment by the federal and state governments.

The protesters were largely made up of survivors of Boko Haram attacks on Gwoza, and families of Gwoza residents who are still trapped in the local government.

Scores of soldiers and armed police officers tried to prevent the protesters from embarking on their rally.

One of the protesters, a young man said to be about 26 years old, was shot, allegedly by a police officer, and is at present in critical condition at the University of Maiduguri Teaching Hospital.

Despite the presence and actions of the security officials, the protesters got to the government house in Maiduguri.

After being kept outside the government house for several minutes , the protesters were allowed to go into the deputy governor’s office, where they insisted on being addressed by the state governor, Kashim Shettima.

While the protesters waited for the governor, his deputy, Zannah Mustapha, arrived to address the angry residents.

After over one hour of trying to placate and address them, Mr. Mustapha was told by the protesters that they would only listen to the governor.

“We voted for the governor and not his deputy,” many of the protesters said in Hausa language.

Some of them alleged that the governor was not concerned about their plight because he was not from Gwoza.
“They’ve burned down the entire Gwoza; emir’s palace, local government secretariat, police station,…” some of the protesters yelled while lamenting their situation.

“Most people are on top of the Mandara mountains of Gwoza. They are starving,” they said.

PREMIUM TIMES had reported how Gwoza residents were forced to go on top of the mountain, which borders Nigeria and Cameroon, after Boko Haram sacked and virtually destroyed the community, one of Borno’s largest, early Wednesday. The insurgent group later claimed the town for itself and mounted its flag.

The Nigerian military said on Thursday that it has commenced operations to reclaim Gwoza and other communities claimed by the insurgents.

While in the deputy governor’s office, one of the protesters, who identified himself as Liman Ngoshe, addressed journalist.

Speaking in Hausa, Mr. Ngoshe said those trapped on the mountains are forced to feed on fruits and rain water.

‘They are forced to soak rain water with their clothes and squeeze them for drinking after the rain stops,” he said.

The protesters said over 200 Gwoza residents were killed by the Boko Haram in the past week and lamented that they believed the federal government and the military had abandoned Gwoza.

As at 1:00 p.m., the protesters were being screened into a large hall in the government house, were they are expected to be addressed by the state governor.