Nigeria is shutting down. So everyone is saying. Radio stations are shutting down, movement is limited, ATM’s are running dry, even phone networks are turning off. All due to the scarcity of essential fuel for business. There is an acute on chronic fuel scarcity. The Jonathan government cannot pay the fuel importer cabal. It is believed that the cabal who are mostly corrupt do not expect smooth sailing continuation of the type of mouth watering deals when the incoming Buhari administration resumes office May 29th. 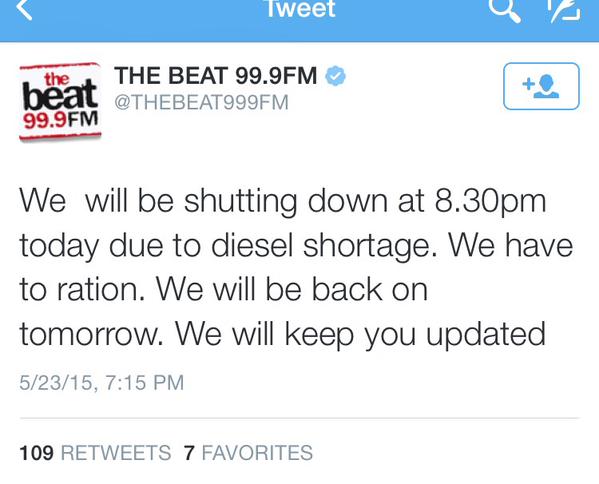 The Jonathan government owed the fuel importers approximately 240 billion naira; that’s almost 2 billion dollars. Of this sum, the Minister of economy, Ngozi Okonjo-Iweala said they paid 156 billion naira, however the oil traders say they have not received the money yet and Jonathan’s money is not that good. They say oil is available waiting to be offloaded but they are not paid and they cannot pay truckers etc. The result: No gas, no diesel and a nation over $60 billion in debt. 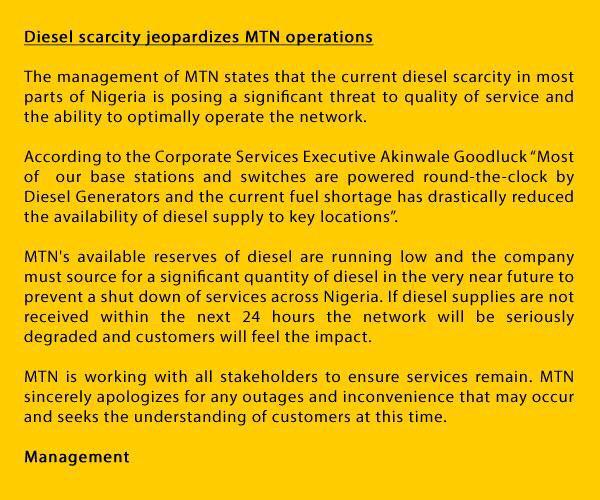 Jonathan is believed to have diverted billions in state revenue toward a last-minute desperate campaign to save his job; he lost and now the nation is broke and grinding to a halt. it is a most wicked but not unexpected parting gift, Nigerians are saying on twitter.

Public and private radio and TV stations shutting down, telephone services are about to join in, welcome to the stone-age courtesy Jonathan.

After looting for years we are still on ground, Now they wanna crash the country but we say no way. May 29 on course @Ayourb

The wicked, heartless, unconscionable, peccant, and iniquitous man from Otuoke slowly destroying whatever is left of the fabrics of Nigeria.

Dude wants to depart by making sure anyone who was ever in doubt about his incompetence is left with zero doubt.

On May 28, they should present a big card to Nigerians with the words “WE ARE SORRY! WE FAILED YOU! MAKE US PAY DEARLY! GOOD BYE!”