When I first coined the “Vacancy in Aso rock” phrase and JPEG image for a magazine I coauthor, during the fuel subsidy removal Occupy Nigeria riots of January 2012, perhaps I then did not appreciate the full gravity of the Nigerian dilemma.

The vacancy in Aso rock has reached its final nadir. We hang precariously at the edge. We are dangling, hoping not to fall before Aso rock is finally occupied. Worse than mere vacancy, bandits occupied the Villa for the past 6 years and they have robbed us blind and now we are being held to ransom by them and the fuel cabal they have fed to rabid corpulence. 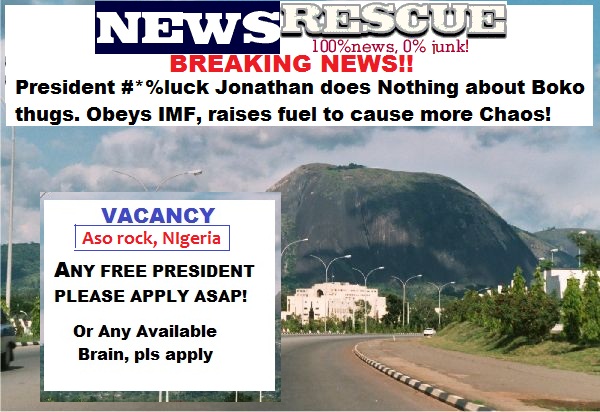 The story is known, it’s time to start afresh. Nigeria cannot wait for the handover. Jonathan can complain all he likes. It is time for an executive-in-waiting decision and an ante-directive by President-elect Muhammadu Buhari.

People are dying as a result of this fuel scarcity. Hospitals are running on red. Generation sets are out of diesel leading to lack of power, light, news media, communication, food and to insecurity, crime, and related catastrophes. This is an EMERGENCY!

President-elect Muhammadu Buhari while not promising these cabal marketers any future extension of Jonathan’s benefits, can and should I believe address them directly and assure them that he will settle the legitimate differences in outstanding deficits as a primary duty on June 1st God-willing and will tender them some iota of compassion and lean sentences where merited in recognition of their obliging him today.

I believe the President-elect if he is not already should, as not only the President-elect but in his capacity currently as an elder statesman, be meeting with these marketer cabal owed the N200 billion and either assure or warn them as the case may be. He does not need files and advice from Jonathan’s government for this. He is only assuring them they will be promptly paid as a matter of State emergency and/or promptly disciplined as the cases determine. They know the repercussion.