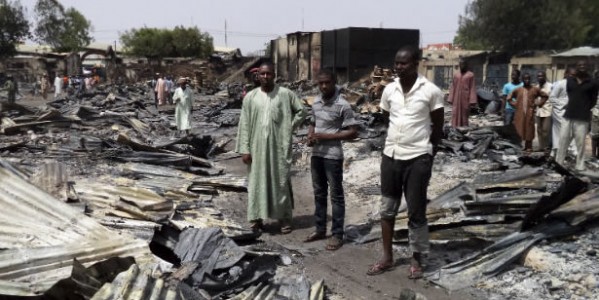 Defence Spokesman, Major General Chris Olukolade on Monday said members of the armed forces are presently preparing to embark on actions that will reverse current insecurity manifestations in the Damboa area of Borno State.

Olukolade was reacting to questions raised by correspondents about reports that members of the Boko Haram terrorist movement have taken over the area and even hoisted the flag of the organisation after dislodging the military and killed scores of civilian residents.
“The Nigerian military will not concede any portion of this country to any such group. We are firming up our deployment in that general area. Right now they (members of the armed forces) are setting up their activities to reverse any form of insecurity that is noted around there,” he declared.
The occasion was the regular briefing by the National Information Centre (NIC) coordinated by Mr. Mike Omeri who also seized the opportunity to advise Nigerians to disregard alleged threats by some Kano lawyers who warned non-northerners to move out of the area within two weeks or face the consequences. Omeri said “the citizens of Nigeria have right to live anywhere within the territory. Therefore, no group of persons or individuals has any rights within the constitution of this country to order the movement of any citizen out of any territory or state. If any lawyer or any groups of persons or government embarks on this, it would end up an exercise in futility, one that should be totally ignored by all Nigerians.
“We also heard about a similar thing in Imo State sometimes ago. This is the time to state it loud and clear that citizens should not tolerate it.”
Reiterating the point, Spokesman for the Nigeria Police, Mr. Frank Mba insisted: “Nigerians wherever they live in this country have a right to freedom of movement, freedom of association, have a right to own property and to pursue their daily lives as long as they do so within the confines and norms of the law and therefore, it is clearly outside the powers of any other citizens to say any other thing contrary to what the constitution has provided. Those of us within the security sector are monitoring these developments; we are watching it very closely.”
Also at the briefing, Spokesperson for the Department of State Security Services (SSS) Marilyn Ogar expressed bitterness at Mrs Oby Ezekwesili for complaining about delay at the airport by SSS operatives this morning.
“Government has asked the SSS to be at the airport. Statutorily, SSS clears all passengers travelling out or coming into this country. I don’t know why some people will sometimes arrogate to themselves unnecessary importance when we have serious security challenges in our hands”, she moaned.
By PRNigeria