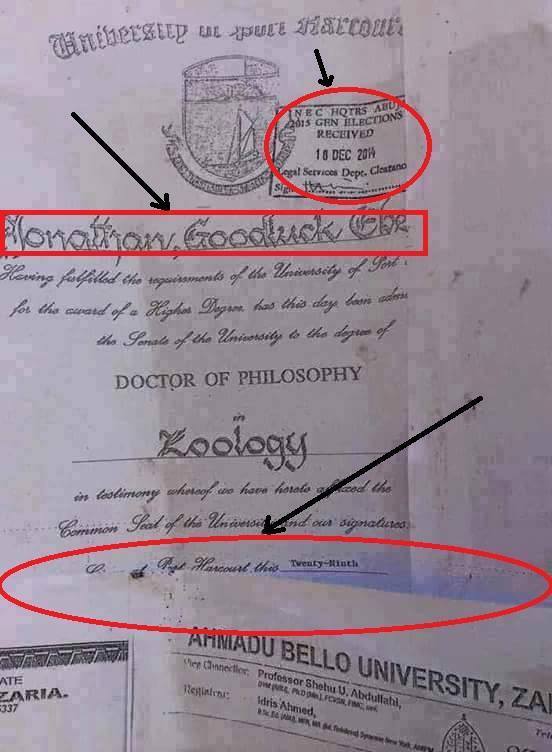 In the aftermath of a hounding of the 1961 school leaving certificate of chief opposition candidate in the Nigerian presidential elections, General Buhari, by the ruling party in Nigeria; Nigerians having finally certified the opposition candidates documents have turned their focus on the president himself.

President Goodluck Jonathan of Nigeria has presented himself as a “Doctor;” a PhD holder. However for several years Nigerians have without success requested for and searched for any evidence of his real qualifications and his thesis in particular. The hashtag #GEJYourThesisPlease? was recently introduced to the quest.

A certain user, Kenai on Nairaland forum did a thorough search of University of Portharcourt archives where the president allegedly obtained his degree in 1995 and only came up only with a publication of the president from 1985 on shrimp. See Nairaland thread here. Download publication here:

KENAI: While I am no spokesman for the president or any of these political players for that matter, I remember I did once come across one of his academic publications…

I found it at the AquaticCommons, and it was originally published on 29th November, 1985.

The publication is titled:
“Identification of West African Estuarine Shrimp and Crab Larvae”
by Jonathan, G.E. and Powell, C.B. and Hart, A.I. (1985).

The PDF is also downloadable here

That’s the much I could find for now, but I’m sure we’d find more if we actually looked.

Nigeria’s president must have been uniquely capable of multi-performance.

His official resume lists him as being a lecturer at the Dept. Of Biology, Rivers State College of Education, Port Harcourt from 1983 – 1993.

But at the same time, by 1985 while he was employed as above, he “obtained” his masters degree in Hydrobiology/Fisheries Biology according to his resume.

He achieved the same feat with his PhD which’s thesis is being sought.

And while functioning as Assistant Director as above, also “ran” his PhD which he claimed to have obtained in 1995.

However no thesis for this “PhD” is in the public domain and has been found in any academic records.

Documents purported to be the president’s Doctorate of Philosophy in Zoology stamped by INEC, the Independent Electoral Commission, had the certifying Provost signature conspicuously covered; the date covered and other parts of the certificate deliberately covered to prevent any kind of scrutiny and validation.

A statement purported to former president Olusegun Obasanjo said “they knew Jonathan did not complete his PhD.”

In a recent publication that came out in CityPeople last December attempted to address these perturbing questions, Prof. Charles Bruce Powell was claimed to have been Jonathan’s “supervisor for his Master’s and PhD in Hydrobiology.” However the article was immediately proven not credible as the president does not claim to have a PhD in Hydrobiology, but one in Philosophy in Zoology. If he obtained his masters in Hydrobiology, then that is where Professor Powell supervised him.

Furthermore, unfortunately his alleged PhD supervisor, Prof. Charles Bruce Powell has passed (in 1998). Though this demise does not excuse the “missing” thesis that has not been seen published in school and global records as academic institutions do not run on individual but college and official records.

The question remains: is president Goodluck Jonathan really a doctor or is he guilty of grand perjury? Did he dropout or complete his PhD and defend his dissertation? Where is his thesis?

It bares saying that it is important the presidency addresses this concern among Nigerians so the people can move on to other pressing matters.