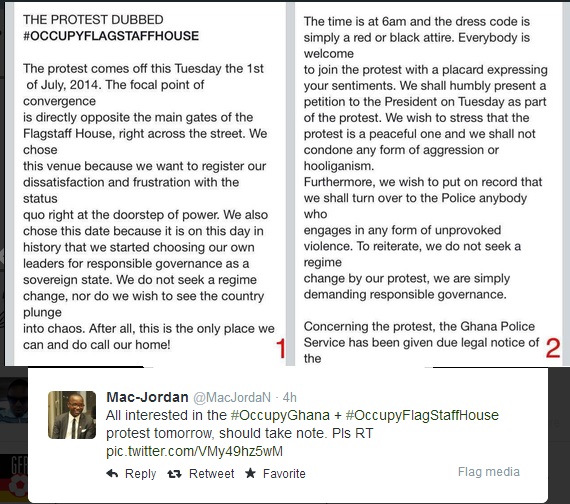 A group of Ghanaians are organizing a non-partisan protest against government for current economic hardship at the premises of the seat of government, the Flagstaff House as Ghana marks Republic Day on July 1.

Dubbed ‘Occupy Flagstaff House’, the organisers say every Ghanaian deserved to be happy and are tired of talking about hardship on social media.

It is timed to coincide with the celebration of Ghana’s 54th Republic Day, July 1 – the day that the country totally weaned itself from British Colonial rule.

A lawyer and a convener of the protest, lawyer Nana Kwesi Awuah explained they have notified the Nima Police and the Inspector General of Police Mohammed Alhassan.

Ghanaians are grappling with a persistent power crisis, fuel shortage and a 12% hike in electricity tariff and 6.1% for water.

Fuel prices are expected to go up any time soon.

They recognised the tendency for any political action in Ghana to be branded partisan but Nana Sarpong Agyeman Badu, organizer of the group, insisted their protest is not supported or financed by any political party neither are they calling for “regime change”.

What they are calling for is action on illegal mining which has led to water pollution, depreciation of the currency, the payment of arrears owed National Health Insurance service providers and Ghana’s undocumented unemployment problem.

“The apathy in Ghana is way too much. Ghanaians should rise up and demand their share”, Nana Sarpong Agyeman Badu said.

Getting police permit and protection

Organisers of Occupy Flagstaff House say they have notified the Police and do not see any hindrance to the planed protest.

They will be meeting the Police Monday morning to discuss details of the protest.

The organisers are convinced “the police do not have the power to stop us. It is only the court that has the power”.

The police would have to obtain an injunction from court, the lawyer explained citing the Public Order Act.

They also assured the police they will not condone any violence on the day. “We are ready to turn over a group of person who decide to engage in any violence”.

They are inviting Ghanaians to bring along their placards and congregate opposite the Flagstaff House from where they will cross the street and walk over to present their petition to the President.