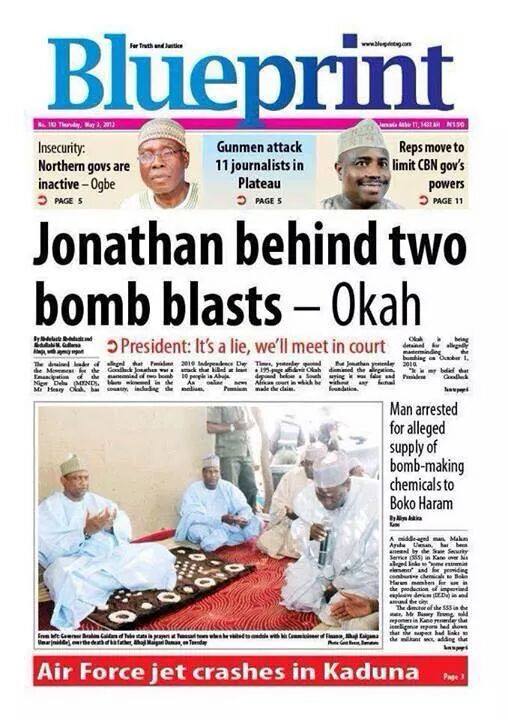 A senior Niger Delta militant undergoing trial in South Africa is alleging that President Jonathan was behind two bombings in 2010—one in Abuja on Independence Day and the other in Delta State seven months earlier.

Henry Okah, leader of the Movement for the Emancipation of the Niger Delta (MEND), who is standing trial over the deadly October 1 bombing near the Eagle Square, is making the claims against Jonathan in a sworn affidavit to be filed next week.

Details of the affidavit were published by Premium Times website yesterday, in which Okah said the president and those working for him engineered the blasts as a desperate political strategy.

He said while the Abuja bomb was meant to galvanise opposition against northern leaders ahead of the 2011 election, the bombing in Delta was to create an atmosphere of insecurity so as to upstage Governor Emmanuel Uduaghan and replace him with Godsay Orubebe.

“It is my belief that President Goodluck Jonathan’s government working with a faction of MEND planned and executed the bombings of 14 March 2010 and 1 October 2010,” Okah said in the affidavit, according to the website.
But the Presidency yesterday denied Okah’s claims.

“The attention of the Presidency has been drawn to reports in the media of allegations made against President Goodluck Jonathan in an affidavit said to have been sworn to by Mr. Henry Okah who is facing trial in South Africa for his involvement in terrorist acts against the Federal Republic of Nigeria,” Jonathan’s spokesman Reuben Abati said in a statement.

“The Presidency categorically affirms that these allegations are false in their entirety and without any factual foundation. As the case of Mr. Okah’s involvement in the plotting and execution of terrorist attacks in Nigeria is already before a court of competent jurisdiction in South Africa, the Presidency does not intend to say anymore on the matter for now and will, in accordance with due process and international law, make a full representation on the matter to the court when the trial opens.

“The Presidency also advises the Nigerian media to respect the sanctity of the legal and judicial processes in this matter and avoid becoming willing tools in the hands of Mr. Okah and his agents in an entirely diversionary trial by the media aimed only at falsely impugning the character and integrity of the President and officials of his administration.”
Okah was arrested in October 2010 in the wake of the Independence Day bombing. He had lost his bail bid, which he now wants to renew through the affidavit.

His trial is set to start on October 1, exactly two years since the incident that occurred close to the Eagle Square in Abuja where President Jonathan was attending Nigeria’s 50th anniversary celebrations.
MEND had claimed responsibility for the attack, but Okah has denied membership of the group and plotting the attacks.

In his affidavit, Okah said Jonathan and his aides organised the attacks to demonise political opponents and win popular sympathy ahead of the 2011 elections.

“The bombing on 1 October 2010 was a platform for the elimination of political opposition from the North in the form of General Ibrahim Babangida. The bombing of 1 October 2010 was also intended by the President Goodluck Jonathan Government to create anti-North sentiments nationwide in order to galvanise support from other sections of Nigeria against other northern candidates in the Presidential elections,” Okah said in a 194-page affidavit.

“The purpose of the 14 March 2010 bombing in my opinion was to create an atmosphere of insecurity in the Niger Delta where President Goodluck Jonathan at that time was fighting to oust the governor Mr. Emmanuel Uduaghan whom President Goodluck Jonathan intended to replace with his Minister for Niger Delta, Mr Godsday Orubebe,” he said. He said he was in touch with the president’s close aides when the October 1, 2010 bomb went off, and had no inkling his arrest was being planned.

Okah first made allegations linking the Independence Day bomb with Jonathan’s aides in an interview with Al Jazeera television weeks after the blast. In the interview, he claimed he was arrested for refusing to influence MEND to retract its claim of responsibility. Since then, Okah has been denied bail at least twice, with one at the South Gauteng High court, Johannesburg where he is filing a new application for bail based on “new facts.”

Okah said he had a long-standing relationship with Jonathan which started in 1999 while he was deputy governor of Bayelsa state. He claimed he was close to Jonathan such that Mrs. Diezani Alison-Madueke, then a minister of Mines and Steel, sought for his support for the President to pick her as petroleum minister.

“The last call I received from Ms Madueke was at 6:41:35 on 4 April 2010 during which she thanked me for my contribution in influencing her appointment as Minister of Petroleum,” he said