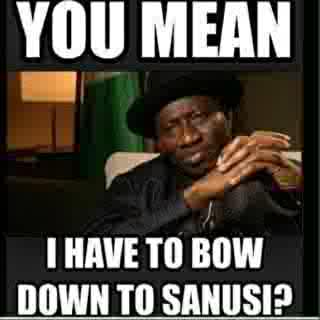 The Bombardier aircraft that was recently released to the governor could not leave the airport as aviation agencies claimed there was an order from above to stop night flights out of the Mallam Aminu Kano International Airport in Kano.

SaharaReporters learnt that National Airspace Management Authority (NAMA)operatives refused to give clearance to the governor’s jet to take off leaving the governor and his aides no other option than to travel by road out of Kano.

The Kano State commissioner for State Affairs, Aminu Abdusalam who was responsible for hosting guests to the governor confirmed the development in a short speech tonight in Kano. The seizure of Ameachi’s jets followed a riot in Kano against Sanusi’s choice as Emir.

This will not be the first Governor Amaechi’s jet would be impounded by president Jonathan, on April 26th 2013, the governor and his entourage was grounded for about two hours at the Akure Airport, Ondo State, on the allegations that it violated aviation procedures before take-off. The jet was later seized by the Nigerian government until it was released last week.

Amaechi and his aides were returning from Ado-Ekiti, where they attended the burial of the late  Deputy Governor of Ekiti State, Mrs. Funmi Olayinka.