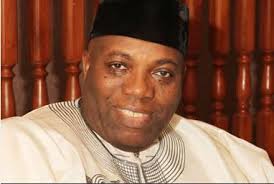 Former Education Minister and leader of the Bring Back Our Girls Campaign, Mrs Oby Ezekwesili, had yesterday led  members of the group in Abuja to demand from President Jonathan to redouble efforts to secure the release of the over 200 girls who were kidnapped from their school in May this year in the remote town of Chibok in Bornu State.

The protesters planned to walk to the Presidential Villa but were barred by security agencies from gaining entrance into the official residence of President Goodluck Jonathan.

In series of tweets via his handle, Mr Doyin Okupe, ridiculed Madam Oby Ezekwesili for leading protest march with some few numbers of people to the Presidential Villa.

“Bring Back Our Girls must change their tactics. The present style is neither working nor producing the desired result. Or is it that Nigerians just don’t believe in them?

“Bring Back Our Girls’ outing with 48 people today was a no show, and why insult Minister of Water Resources, Sarah Ochepa for God’s sake? Frustration or anger from failure

“With today’s poor and shameful outing, Oby Ezekwesili and her team should disband and go home. It is becoming a sordid affair; there must be other ways of seeking attention,” Okupe tweeted.

However, Oby Ezekwesili berated public officials occupying the Presidential Villa for insensitivity and attack on the Bring Back Our Girls advocacy group despite its committed efforts and strong demand from the government in securing the release of the kidnapped Chibok girls.

Her words: “Silly attack on me by one of the women Ministers that came to meet with us at our march to meet the President on our Chibok Girls. Really silly

“When our Chibok Girls return, they would learn that the “our belly-our-god” folks tagged everyone that advocated for them “enemies”. Shameless!”