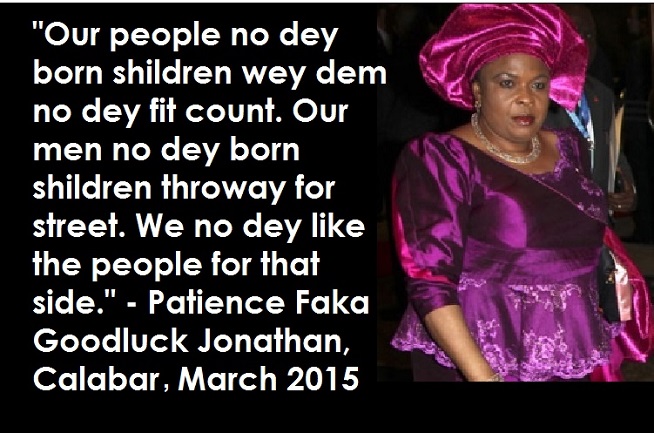 The Presidential Campaign Council of the All Progressives Congress has lodged a complaint against Nigeria’s First Lady at the International Criminal Court (ICC) for urging violence against opposition in campaign for the general elections starting March 28.

Dame Patience, President Goodluck Jonathan’s wife, during a rally in Calabar, Cross River State last week, had called on supporters of the ruling party to “stone” members of the opposition when they come to the state campaigning for change.
“Anybody that comes and tells you change, stone that person. Anybody that tells you change, tell that person, carry your change and get away,” she was quoted as saying at the rally.

Amaechi said copies of the letter would be sent to the Inspector General of the Nigeria Police (IG) and the National Human Rights Commission (NHRC).

Governor Amaechi said “Change, as the entire country must know by now, is the slogan of the APC – the rallying cry of a political party that wishes to bring hope of greater and better things to come for Nigeria and Nigerians.

By her statement, Mrs. Jonathan was clearly calling on PDP supporters in Calabar to attack supporters and campaigners of the APC in the state.”

He also likened some of Mrs. Jonathan’s inciting statements and conduct during this political campaign season, to those of Mrs Simone Gbagbo, wife of the former president of Cote d’Ivoire, Laurent Gbagbo, prior to that country’s 2010 election.

The ICC indicted Mrs. Gbagbo for her part in planning to perpetrate brutal attacks – including murder, rape, and sexual violence, on her husband’s political opponents in the wake of the 2010 election.

Mrs. Jonathan does not occupy any formal office in the Nigerian government, as the position of First Lady is not recognized by the Nigerian constitution. But Mrs. Gbagbo’s case shows the ICC’s awareness of how someone beyond formal governmental and military hierarchies can be identified as responsible for serious international crimes.

The APC campaign said Mrs. Jonathan’s incontrovertible hate speech not only contravened the laws of the land, but also went completely against the Abuja Peace Accord jointly signed by the two presidential candidates, General Buhari and President Goodluck Jonathan – and aimed at forestalling violence before, during and after the 2015 election.

“PDP supporters in the state who may not know better could easily yield themselves to the First Lady’s admonition and embark on a process of wanton stoning and other attacks against APC members,” Amaechi said.

The campaign also called on the Nigeria Police to put in place emergency measures to protect the lives and property of APC members in Calabar and the entire Cross River State.

Mrs Jonathan was reacting to a decision by the All Progressives Congress Presidential Campaign Organisation to file a complaint against her at the International Criminal Court (ICC) for allegedly calling on People’s Democratic Party’s supporters to “stone” anyone asking for change.

The spokesman of the first lady, Ayo Adewuyi, who spoke to our correspondent on telephone last night, said Mrs Jonathan, “as the mother of the nation, believes in peace, especially before, during and after the forthcoming general elections. And she will not subscribe to anything that could cause violence”.

He added: “It was the APC supporters that stoned the sitting president of the country during the electioneering campaign”.

Campaign slows down
The campaign for the March 28 Presidential election had slowed down since the poll was moved forward from February 14.
But since then Mrs.

Jonathan has launched her own campaign for her husband’s re-election under Women for Change and Development Initiative.

She also made disparaging remarks in pidgin English about a section of the country thus: “Our people no dey born shildren wey dem no dey fit count. Our men no dey born shildren throway for street. We no dey like the people for that side.”
The following day, the First Lady urged Nigerians not to vote for the APC presidential candidate, retired Major General Muhammadu Buhari, describing him as an old man and also “brain-dead”.

The All Progressives Congress Presidential Campaign Organisation, in a swift reaction last Wednesday in Abuja, said that it was not only insulting for Mrs Jonathan to describe the APC presidential candidate as “brain-dead” but also demeaning of her status as the First Lady.

The PDP Presidential Campaign Organisation, however, backed the First Lady.

Mrs Jonathan spoke on Tuesday, March 3, at another PDP Women Presidential Campaign Rally in Lokoja, Kogi State.
She also said that Buhari would put women in purdah and trample on their rights if elected into power.

“Vote for my husband, Jonathan. Do not vote for Buhari. He is an old man. People when they become old may not reason well and their brain may even be dead,” Mrs Jonathan said.

“Wetin him dey find again? Him dey drag with him pikin mate. Old man wey no get brain, him brain don die pata pata,” she added in pidgin English.

President Jonathan, who is seeking re-election, is facing stiff opposition from General Muhammadu Buhari, the candidate of the All Progressives Congress presidential retired.