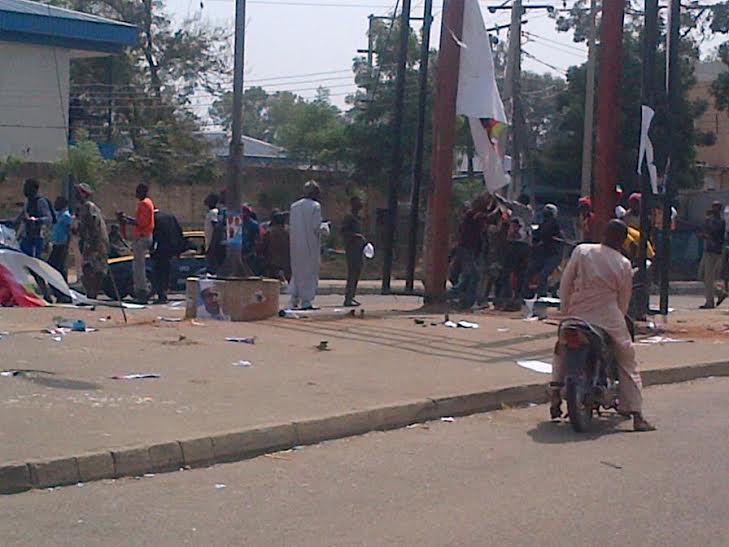 The video demonstrated uncontrollable anger and resentment mixed with poverty and frustration.

An uncoordinated crowd of hundreds of children and youth descended on anything to do with the Nigerian government today in Bauchi state, tearing up posters of the president and pelting his convoy with water bags, shoes, stones and anything they could lay their hands on.

The video illustrated the increasing frustration with the corrupt Goodluck Jonathan administration. Nigeria’s north is worst hit by poverty and lack of opportunity with 80% of the population living below a dollar a day.

There is no security for life in the north which has been exclusively plagued by Boko Haram terror and bombings for the entire 5 year duration of the Jonathan administration. Over 100,000 lives have been lost with over 2500 massacred in the Muslim predominant town of Baga in a 4-day terror attack in January that president Jonathan refused to condemn.

In April last year over 200 girls were abducted from a Christian predominant Chibok village; the government denied the abduction, later claiming the girls had been freed. 280 days later hearts are broken as the people have resigned to the reality that the Jonathan government will not be able to free them and thousands others living in Boko Haram controlled territory.

The people are not interested in elections, they simply want president Jonathan out as they shout, “Bamayi,’ translated, “we do not want;” and also call “sai Buhari” showing their support for chief opposition candidate, Muhammadu Buhari.

The Jonathan government has failed at providing any form of security in the nation and he fell victim to his own malgovernance, civil right activist Dr Brimah has said.