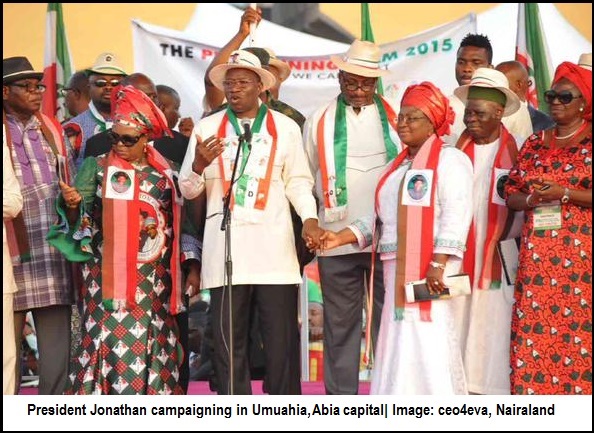 President Jonathan  was in Umuahia yesterday for his campaign flag off in Abia State but refused to campaign in Aba.

Angry youths in Aba expected the president to visit Aba to see what their governor did to Aba peoples.

Angry youths had gathered stones and pure water to throw at their governor, T. A. Orji, their PDP candidate of the state 2015.

Aba is the main commercial city and the heart beat of Abia State, the heart of Igbo-land and the historic city of one of the largest ever Nigerian riots against colonial rule, the 25,000 women, Aba riot of 1929 that humiliated the colonialists.

NewsRescue gathered that the last time the governorship candidate of PDP, its senators and Federal House. Reps members were in Aba, they were stoned and met with pelted water sachets.  This happened in December at Aba stadium on the last day of Aba Marathon race.

The Aba youths and Abia strongly reject the candidate of PDP imposed to them by Gov’ T.A. Orji.

They have decided to vote PDP Out in the February election.

Many have declared that they have decided to vote for Buhari as man of the people for coming to Aba to campaign and the candidate they believe will listen to the people.

It can be recollected that general Buhari was crowned by the Enyi of Aba as the Ogbuagu 1 of Aba, Chief in Aba last week during his campaign there where he spoke to massive crowds.

Aba youths and many other groups in the state have endorsed General Buhari.

It is shocking that despite president Jonathan’s claims to be affiliated to Igbos. he did not come to the heart of
Igbo (Aba) to Campaign.

Some say their late leader Ojukwu was taken to Aba to show to Aba people his body not to Umuahia.

Some youth interviewed by NewsRescue said, “Jonathan please forget our votes, you are not part of us. We need CHANGE! BUHARI.”