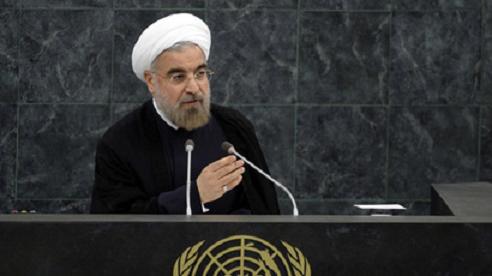 Even though it was a major exporter of crude oil and held some of the world’s largest natural gas reserves, Iran made a compelling case over half-a-century ago that it needed, almost immediately, to produce an additional 20,000 megawatts of electricity by constructing 23 nuclear power plants. At the same time, Iran’s government made the case that the country needed to acquire the capacity to enrich uranium in order to fabricate the reactor fuel for such an ambitious programme.

Western governments eagerly endorsed these arguments, praising Iran’s then Shah Mohammad Reza Pahlavi’s ambition to rapidly modernise Iran while overlooking the reality that he was presiding over a ruthless dictatorship and diverting much needed capital to purchase massive amounts of weapons from the US and other Western countries. And so, during the 1960s and 1970s, billions of dollars were invested in establishing an Iranian nuclear programme and training thousands of Iranian nuclear experts in the West – until Iran’s 1979 Islamic Revolution replaced the monarchy with an Islamic Republic.

After charging enormous sums of money to build the infrastructure for a comprehensive nuclear industry in Iran, Western companies pulled out of the country, leaving large numbers of highly qualified experts and scholars wondering about their fate. Iran’s new political leaders recognised the importance of an advanced nuclear programme to progress in fields such as medicine, agriculture, industry and energy; attempts were made to find foreign partners to complete the projects, but with little success. Progress in Iran’s nuclear development only resumed after Iranians learned to rely on themselves and their own scientists to move the programme forward.

The US, which had enthusiastically supported Iran’s nuclear programme under the Western-backed shah, had now become Tehran’s leading antagonist, relentlessly threatening countries to refrain from cooperating with Iran. Not only were friendly countries coerced into steering clear of Iran’s nuclear programme, they were even warned not to invest in Iran’s oil and gas industry.

The nuclear issue later became an excuse for the US, eventually joined by the EU, to impose “crippling sanctions” on Iran, in order to inflict severe pain on ordinary Iranians. Among other things, these sanctions led to a critical shortage of imported medicines in Iran. As a result, large numbers of children and cancer patients have died. This outcome calls to mind then US Ambassador to the United Nations Madeleine Albright’s response to a question about the more than half-a-million Iraqi children who had died because of US-instigated sanctions: “We think the price was worth it.”

By now, the US and its European allies have accrued abundant experience imposing suffering on ordinary Iranians. Before the revolution, they imposed and maintained a brutal monarchy in Iran. After the revolution, the US gave refuge to the shah and his henchmen (which led to the takeover of the US embassy in Tehran) and confiscated Iranian assets.

During the 1980s, Washington supported then Iraqi President Saddam Hussein’s ruthless aggression against Iran. Not only did it assist the Iraqi dictator in producing chemical weapons and provide him with satellite photos so that his army could use them with greater precision against Iranian civilians as well as combatants, it even blocked the UN Security Council from identifying, condemning, or taking action against the perpetrator of these incredible crimes against humanity.

Following Saddam’s massacre of 5,000 Iraqi Kurds in Halabja in 1988, the US government – though aware of the facts – nonetheless attempted to attribute this atrocity to Iran. Thousands of Iranians continue to suffer and die today because of such barbarism – yet, despite all this, the Islamic republic has always refused to use or even to produce chemical or biological weapons.

Over the years, the West’s acts of sustained violence against the Iranian people have steadily grown – downing a civilian airliner, destroying naval ships and oil installations, support for groups conducting terrorist strikes inside Iran, and carrying out cyber-attacks.

Despite these grievances, successive administrations in Iran have repeatedly indicated that, if the US moves to recognise and respect the Islamic republic as a sovereign and independent country, rapprochement would still be possible. Iranian officials have frequently stated that respecting Iran’s rights, including its right to peaceful nuclear energy within the framework of the Nuclear Non-Proliferation Treaty, is a prerequisite for normalised relations and would significantly decrease regional tensions.

Many Iranians are convinced that their country’s offers for reconciliation have been rejected by Washington and its Western partners because of Iran’s opposition to apartheid in Palestine and the enormous influence of the Zionist lobby in the US. In turn, the Islamic republic’s determination to be a truly independent country motivates Western powers to seek to delegitimise it.

During former President Mahmoud Ahmadinejad’s administration, Western governments and media outlets relentlessly attempted to depict the former president as a major threat to regional and global peace (paradoxically, when it suited the Western narrative, he was also portrayed as powerless). Following the 2009 Iranian presidential election, Western “experts” and policymakers cited unrest in Tehran (encouraged by Western-affiliated media outlets) to justify their refusal to come to terms with Ahmadinejad’s victory and attempted to depict him and the Islamic republic as illegitimate.

With the election of President Hassan Rouhani, the anti-Iranian lobby and Western propaganda machine faced a different situation. The new president was elected under the same electoral process used during the previous election and with a very high turnout. Hence, it became clear that Iranians continue to trust the polling procedures and ignored claims of illegitimacy and fraud.

Demonising the new president has also become more difficult because of the sharp contrast between Rouhani’s approach and rhetoric and that of Ahmadinejad’s. The new president has been careful not to make statements that could be wilfully mistranslated by Western media – a regular feature of their coverage of the former president.

Rouhani also took a more conciliatory approach towards the West, in order to provide an opportunity for the US government to reconsider what Iranians believe to be is its historically emotional and irrational attitude towards the Islamic republic.

To this end, the new Iranian administration initiated an approach that Supreme Leader Ayatollah Ali Khamenei called “heroic flexibility“, to examine whether the Western members of the so called P5+1 (US, Russia, China, UK, France plus Germany) are serious about a mutually acceptable negotiated settlement. The initial result of this approach was the Joint Plan of Action concluded with regard to the nuclear issue in November 2013.

Despite the existence of an already intrusive IAEA inspection regime that has never revealed anything more than a peaceful civilian nuclear programme, the Iranian government agreed to even further transparency going far beyond its international obligations. These and other goodwill gestures came at a price, as some Iranians began to raise questions about the degree of flexibility being shown.

Nevertheless, US President Barack Obama and other senior US officials continue to threaten Iran with military strikes and to refrain from explicitly acknowledging Iran’s full nuclear rights. This has increased suspicions among Iranians that the US still clings to a destructive, zero-sum worldview and that it believes it can somehow force Rouhani to sign away Iran’s sovereign rights. This is a potentially dangerous misunderstanding of the Iranian president’s position and could lead to disastrous Western miscalculations.

Regardless of their moral implications, Western policies in countries like Iraq, Afghanistan, Libya, Egypt, Bahrain, and Syria in recent years have already had devastating consequences for the US’ global strategic position. In this regard, the cases of Iran and Ukraine are particularly interesting examples of how the continuation of such policies by the US and its partners can inflict even more damage on their standing and influence around the world.

To force Iranian capitulation, Western countries have, among other things, excluded Iran, with the world’s second-largest proven reserves of natural gas, from the EU market, thus consolidating a Russian near-monopoly. And now that they wish to impose a Kiev-based coup regime on southern and eastern Ukraine, they have almost no cards to play. Ironically, crippling sanctions have started to cripple the tormentor.

Seyed Mohammad Marandi is professor of North American Studies and dean of the Faculty of World Studies at the University of Tehran.