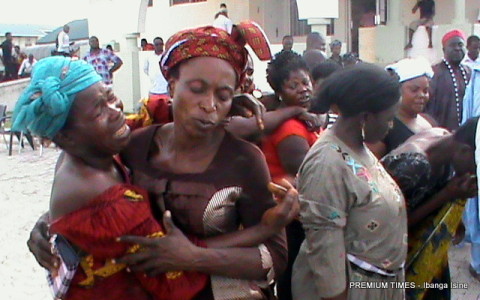 With the National Conference preparing to wind up in a few days, some delegates from the Southern part of the country today vowed to resist the new revenue allocation formula proposed by the leaders of various zones.

The Consensus Committee recommended, among others: 18 per cent for oil producing states; 5 per cent allocation for solid minerals development; and 5 per cent for the North East to rehabilitate the victims of Boko Haram violence.

The recommendation, which was read out by Prof. Ibrahim Gambari on behalf of the leaders of the zones, was vehemently rejected by some delegates, mainly from the South, who described it as ‘outrageous,’ and threatened to shut down the 5 per cent request.  They argued that Nigeria should not be rewarding people who are wreaking havoc and unleashing mayhem on innocent citizens.

One delegate, who spoke to journalists on condition of anonymity, said that the implication of the 5 per cent “rehabilitation fund” was to rob Peter to pay Paul.  He expressed the view that there is no basis for such a fund, pointing out following the civil war, no such fund for the victims, who were mainly from the South East, was set up. He also cited the victims of the flood which ravaged many parts of the South West last year, noting that they were abandoned to their fate and given no compensation.

There was high tension among the delegates when the recommendation was read on the floor of the Conference, with both sides threatening fireworks ahead of the debate and voting on the matter tomorrow. Prominent delegates from the South West vowed to scuttle and vote against the request by the North when the Conference resumes in plenary.

As a result of the disagreements, the leadership of the conference adjourned abruptly.