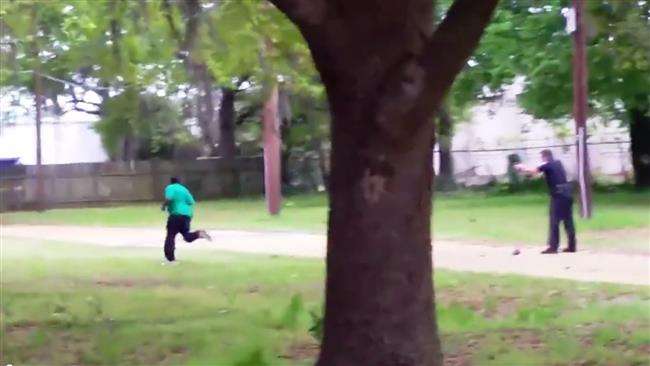 A white cop has been charged with murdering a black man in the US state of South Carolina following the release of a video by a bystander.

On Tuesday, Mayor Keith Summey of North Charleston made the announcement at a press conference after the video of the Saturday incident surfaced.

“When you’re wrong, you’re wrong,” Summey said. “When you make a bad decision, don’t care if you’re behind the shield or a citizen on the street, you have to live with that decision.”

The incident follows similar high-profile ones that led to deaths of Michael Brown in Ferguson, Mo., Tamir Rice in Cleveland, and Eric Garner in Staten Island, which caused nationwide protests across the US against police brutality.

The 33-year-old officer, pictured below, had said he killed the man after he took his stun gun in a scuffle that followed a traffic stop. The video, however, shows him firing at the victim eight times as he is running away.

According to police reports, Slager stopped the black man, driving a Mercedes-Benz with a broken taillight but as he ran away, the cop chased him into a grassy lot where the murder happened.

Slager initially fired his Taser which did not stop Scott, police said.

“Shots fired and the subject is down. He took my Taser,” Slager reported on his radio after the incident.