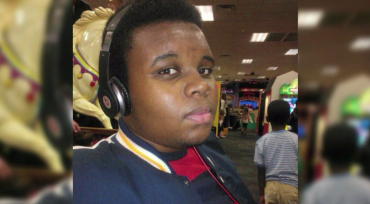 Ferguson, Missouri (CNN) — Missouri Gov. Jay Nixon on Saturday declared a state of emergency and implemented a midnight to 5 a.m. curfew in Ferguson, where the police shooting of an unarmed black teenager sparked a week of protests and sporadic looting.

“I’m committed to making sure the forces of peace and justice prevail,” Nixon said at a community meeting. “If we’re going to achieve justice, we first must have and maintain peace.”

But the meeting at a local church at times was tumultuous.

People repeatedly interrupted Nixon, shouting, “You need to charge the police with murder!” and “We want justice!”

And some residents said law enforcement officers had instigated the violence with their military-like tactics.

State Highway Patrol Capt. Ron Johnson, in charge of security for the town, praised local citizens who tried to stop the looting of several businesses early Saturday. He said law enforcement would not be heavy-handed in enforcing the curfew.

But at least one resident was skeptical about whether the curfew would work.

“It’s an intimidation thing. And you’re basically suppressing people who still have questions that need answers,” said Carissa McGraw, who has joined protests throughout the week. “You have people who — at this point — do not care what authorities say right now.”

Michael Brown killed a week ago

Ferguson, a town of about 22,000 people near St. Louis, entered the national consciousness on August 9 when a white police officer, identified as Darren Wilson, shot and killed and Michael Brown, 18, on a city street during the middle of the day.

Accounts of what happened vary widely. Police said Brown struggled with the officer and reached for his weapon. Several witnesses said Brown raised his hands and was not attacking the officer.

Since then, Ferguson has become a tinder box, with regular street protests, an influx of heavily armed law enforcement officers and intense media coverage.

A new development in the investigation popped up Saturday when a Brown family lawyer, Anthony Gray, said that Michael Baden will conduct a second autopsy on the the teenager’s body. Baden is a high-profile pathologist who testified in the O.J. Simpson, Phil Spector and Drew Peterson trials.