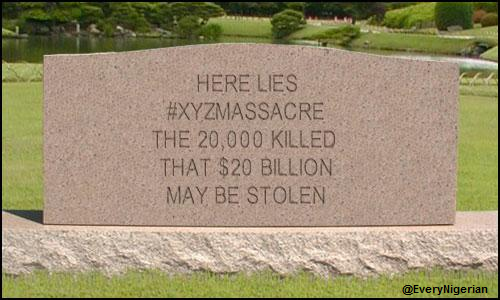 Which massacre? Yobe? Borno? Adamawa? Plateau? Katsina? Kaduna? Benue? Nasarawa? The hashtag, “#XYZmassacre” has become the inevitably appropriate marker for the Nigerian holocaust. 50 here, 250 there, death comes easy in the north these days. Conservative United States estimates put figures at over 20,000 dead in violence predominantly in the north since Jonathan came to power. And the millions of dollars worth of damages in property loses cannot be quantified.

Revolution has been on the lips of most Nigerians, though with a resignation to the reality that the suffering masses are too hungry, fragmented and embroiled in ethnic fracas to. But while the masses have been figuring themselves out and patiently, prayerfully watching how things pan out, hoping some miracle happens; the political elite and government of Nigeria has been so thoroughly engulfed in corruption and looting of the commonwealth, they are aggressively pushing and promoting a war in Nigeria; a war between perceived ethnic groups, religious groups or peasant professionals—the farmers and cattle rearers.

The actions and inactions of our political elite are directly responsible for the state of war in the northeast and the middle belt; and the terror in the creeks. Their stolen money, their stealing money, their silence, their actions and their investment in 2015 have engraved a strong path being towed toward full blown war among the nation’s people.

An angry man does not become a killer, and a killer may not be angry. This is the reality. When we see people, mercenaries dressed in uniforms and being capable of using sophisticated weapons to make coordinated attacks, there is a fire behind that smoke. Ordinary Nigerians get arrested wearing camouflage. When you hear of hundreds riding around towns and operating with impunity in army uniform, for years, you know they are either the army or with the army. Many of the so-called Fulani marauders have been caught and found to speak foreign languages; chartered mercenaries in the country, doused in Fulani attire or army uniform. Of course it is a conspiracy. And we have done nothing. Our borders are open; guns flow freely, no culprit or conspirator goes to jail. It’s impunity galore for all. Or are the terrorists ghosts… that our ‘rapid response’ team has never had an upper hand on them?

The fourth republic politics and democracy has sponsored and created monsters in the nation; none of the sponsors—those who imported the guns into the country and gave it to youth and militia—has yet been arrested and as Nigeria fools itself, thinking an election will hold in 2015 with the climaxing state of conflict and chaos, more guns are being imported into the nation and fed into the hands of killers. These elite politicians with the private jets who sponsor the parties today, free from jail where they belong, created Boko Haram and MEND the last time, and we are watching them again making 20 more, 100 times more deadly terror menaces. We are watching. Shebi (don’t) we like and believe in the colonialists’ politics? We do, we love it to the death.

Each state government and the federal have been involved in the evolution of these terror menaces, killing and burning. Few in this political dispensation are without blame. Not all have shouted like the governor of Adamawa. What have they been watching and waiting for? 2015? Because they are still alive and think they will escape the gangs? Does their pledge to Nigeria and their faith by God command them to wait for a so-called election of 2015 before acting and protesting to the world that all is not right when unknown soldier armies kill hundreds in their states, set villages on fire and live free from justice?

The economy of north Nigeria has been irreversibly destroyed. Farming has collapsed in the northeast. Millions worth of cattle have been eliminated; if they escaped the encroaching desert, they did not escape the bullets of the cycle of violence and if they escaped the bullets, they did not escape the armed rustlers who steal and cart them away in trucks. Nigeria is facing a food shortage, the full effect of which is yet to be realized.

While billions of dollars are looted in Abuja, poverty has peaked, most especially in the poor north of Nigeria and with it has frustration. The people have become zombies. Death is now a normal event. People casually describe how the other day, yesterday to be precise, their children were bound up and shot dead by unknown gunmen in military uniform, as helicopters flew above and how their entire living abode and businesses were burned to the ground. That’s every day business now in the states of the north. Few have not been directly affected.

In the creeks, the people and hooligans interact freely. The people know the kidnappers and the kidnappers know the people. It’s an advertised, lucrative employment that brings revenue to the community. It is the way of life. An amnesty trained youth the other day called his friend earning a good livelihood of hard work in Togo and invited him to join them. The friend told me that his colleague in the Niger Delta tried to tease him into coming down and being part of the lucrative career. “Ol’boy, why you dey suffer yourself, this kidnapping business dey pay seriously here. Come join us oh!” He had said.

The nation rests on a precarious balance right now. A little tip and it will tumble down. *God forbid. The unknown soldiers have not yet crossed out of the north. They are so close. What will happen if they do? What will happen if some mad mullah decides to direct his followers, not at the government and cabal (North and South), the true culprits and ‘infidels’ (does not mean Christians, but means corrupt miscreants and scum of the earth, the ‘in our government, they eat with us’ Boko Haram sponsors-Wendell Simlins and the like) behind our predicament, but at innocent people of the other faith, of the brotherly Abrahamic faiths? We would end up with the war they want rather than the revolution we need.

My prediction is that if Nigeria does not enter a state of emergency soon, there will be no Nigeria by the elections in 2015. And if by some miracle Nigeria makes it to the elections, there will be no Nigeria after. Some want this and this is why some say the some actually sponsor this. But can’t we do it a better way? Everyone has called for True Federalism. Buhari, Tinubu, they all declared this—google it—to be done without a N12m sleeping conference.  Can we get up now, get together now and declare a new Nigeria? Many more of us will be dead (young) before 2015! Jonathan cannot lead a nation. It’s no APC talk, it is no hate, and there is no personal vendetta. Perhaps it is not even his fault, maybe he can lead something, but the political clime just will not allow us test this. So why wait, why anticipate and why die? Again I ask—how many more must die? 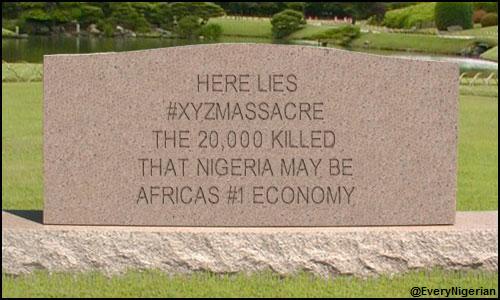