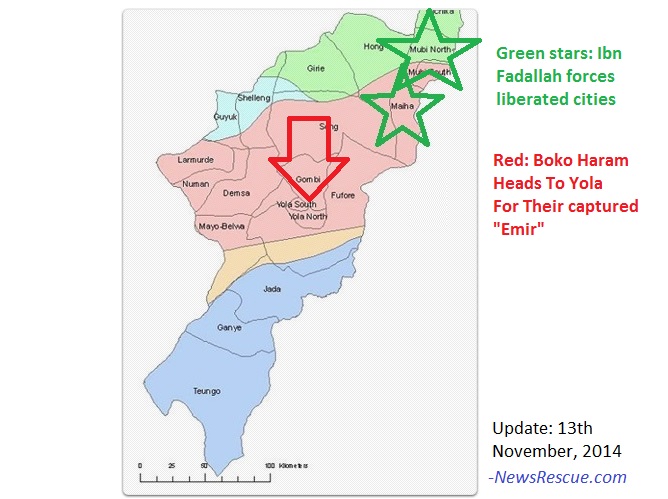 Boko Haram is angry. The terrorists are being defeated across northeast Nigeria by the determined Azzubair Ibn Fadlallah armed civilian resistance forces. The resistance consisting of hunters, vigilantes, Civilian-JTF, ex service men and reliable soldiers of the Nigerian army, has liberated more than two towns in Adamawa state north including Mubi, the town of the nation’s Chief of defense, Alex Badeh, from which he was reported to have airlifted his family to safety in Abuja when the Nigerian military could not defend the people.

The Boko Haram installed Emir was reportedly captured by the civilian resistance forces and transferred to military detention possibly in Adamawa capital of Yola, the focus of Boko Haram’s desperate recovery mission. Boko Haram forces are said to be presently in Gombi north of Yola and have detonated explosives in Gigei Yola.

Meanwhile the Ibn Fadlallah People’s Resistance forces are waxing stronger with their victories and gathering more able bodied recruits and global praise and support for their campaign to liberate the people form the unhinged and government tolerated terror reign.