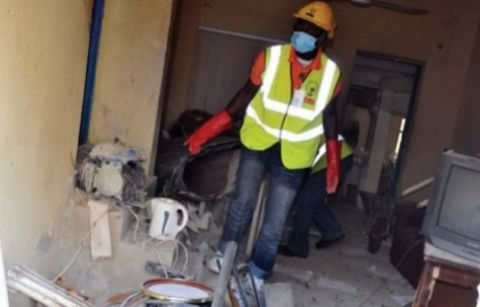 A medical official at Damaturu General Hospital in Yobe State has told SaharaReporters that 21 people are confirmed dead from last night’s bomb explosion at a center where football fans gathered to watch a game. A suspected Boko Haram suicide bomber reportedly detonated the bomb.

The source added that, apart from the dead, 27 people sustained serious injuries. He said the injured had taken up all the beds in the hospital’s accident and emergency ward. “The whole ward is filled with patients with serious levels of injuries, and there is a lot of tension with their family members all over the place,” said the source. “It is hard to work in there with that kind of situation.”

A military source also told SaharaReporters that a suicide bomber believed to belong to the Islamist terrorist group, Boko Haram, detonated an explosive device after storming into an area where people were gathered to watch the ongoing World Cup competition currently taking place in Brazil. The suicide bomber stormed the viewing center in a tricycle popularly known in Nigeria as ‘Keke NAPEP’.