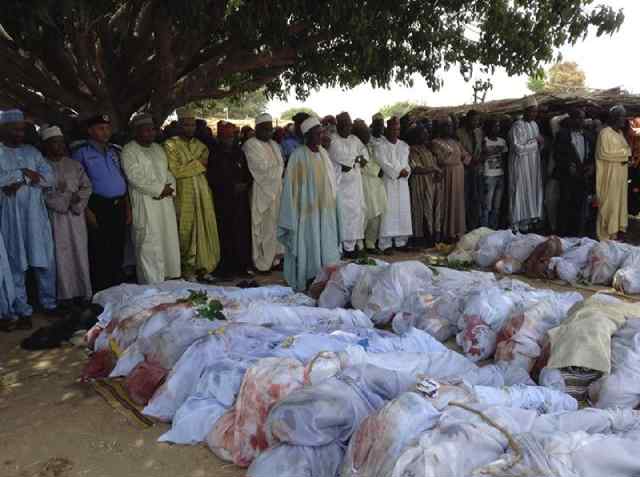 The body counts from the war against terrorism are getting abnormal. Whether the losses are on the part of the security agencies or mere standbys, like school children, it is becoming clearer .that government needs to do more.

Terrorists may do all they can to make the country unsafe, but government has the responsibility to .not only protect us, it has to make us feel safe.

What we find more absurd is that the seasonal killings, their brutality, which the killers have .made their trademark, no longer shock.

The condemnations have thinned. We have moved on with obviously more important matters like who becomes whatever in 2015. We forget the killings quickly in order to sustain the pretence that the union is in sane state.

Nigeria has lost thousands of lives to terrorists. Neither the numbers, nor those killed, appears to be important. Lives, no longer seem to count, they have become numbers, ordinary statistics, .kept for the records.

Which society watches its members decimated in this manner without being shocked into action? How can a society be so unfeeling when it cannot protect its young, its future?

Nigeria has failed to tell terrorists in succinct terms, that their actions would be punished. There .are no examples to deter them.

The choice of soft targets like schools, markets, entertainment centres and churches has become a signature of these attacks. The terrorists want attention, and bigger headlines. Our security agencies need to do more. Failure of intelligence and armed actions against terrorists is .not as bad as the unwillingness of many top Nigerians who can exert pressure on them to do so.

We cannot bring terrorists to account when we place personal and political considerations above millions of lives at risk. The lives at risk could be anyone’s as the indiscriminate attacks .have proved.

The war against terrorists can be won when we are pulling together. Any group that can murder so mindlessly, including children, is a risk to everyone, even to its avowed supporters