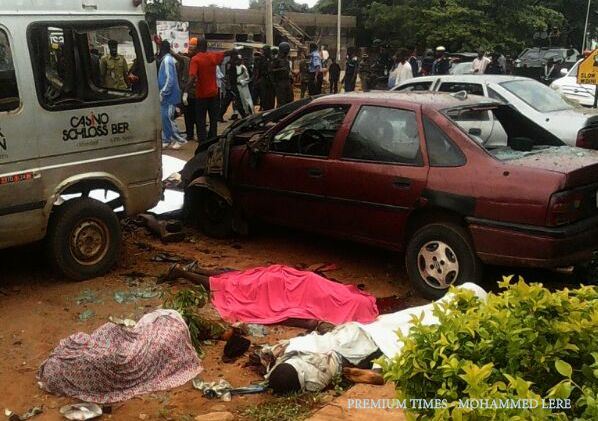 SR– A Kaduna town with reports of several people killed and some injured.

The bomb was reportedly targeting  thousands of Muslims under the leadership of Sheik Dahiru Usman Bauchi, who were rounding off a  Ramadan Tafsir in the square.

Security operatives have sealed the area; Saharareporters could not verify the casualty figures as at the time of publishing this report..

The bomb is believed to have been targeted at a prominent cleric.

An explosion has occurred in central Kaduna killing at least 10 people, a witness has said.

The blast occurred Wednesday afternoon along Isa Kaita road which leads to the popular Murtala Square.

A witness said the explosion is believed to have targeted the convoy of a prominent Islamic cleric, Sheikh Dahiru Bauchi, who was on his way to the Square.

The witness, Hassan Mohammed, told PREMIUM TIMES that the bomb, concealed in a red Volkswagen golf car parked by the road side, was detonated as the cleric’s convoy drove past.

“As I speak to you now, I can see many bodies on the ground,” Mr. Mohammed said.

The police could not be immediately reached.

But the witness said security and emergency officials have arrived at the scene evacuating the victims of the blast.

The blast is the second targeting Mr. Bauchi in Kaduna State. In June, an explosion occurred near his house, injuring one person.

The Sheikh is a known critic of the extremist Boko Haram sect. It is however not clear whether the group is responsible for the attack.