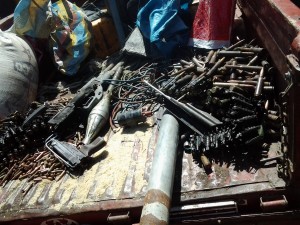 Troops of the 7 Division Nigerian Army in Maiduguri, have continued attacks on camps and hideouts of Boko Haram insurgents within the last one week, killing many members of the sect.

Although the military in Maiduguri said that casualty figure should not be of concern now as operations were ongoing, unconfirmed report told DailyPost that over 200 insurgents might have been killed in the last one week of the military operations.

Speaking on Tuesday, the General Officer Commanding the 7 Division, Nigerian Army, Major General Obidah Ethan expressed appreciation to the people of Borno State for their cooperation and understanding in the continuous manhunt for the Boko Haram insurgents within and around the state in other to ensure safety and peace of the citizens.

General Ethan also urged the people to continue to be resilient and supportive as the troops face the daunting tasks of fighting insurgency.

Ethan stated this in a statement signed by the spokesman of the Division, Lt Col. Muhammadu Dole and made available to journalists in Maiduguri.

The statement focused on the aggressive attacks on Boko Haram insurgents by troops of the division, supported by men of the 79 Composite Group and other sophisticated platform from the Nigerian Airforce.

The statement also explained that the aggressive operations carried out by the troops from 5 Brigade at Gamboru Ngala axis and 21 Brigade at general area of Bama Kelani road recorded huge success on Monday 4, 2013.

According to the statement, “during the operations, several Boko Haram Terrorists in both operations were destroyed. Some of the vehicles destroyed were containing improvised explosive device (IED) meant to be detonated in some towns and villages within Borno State”.

It recalled that previously, the insurgents around Gamboru-Ngala, Mafa, Dikwa, and Marte roads, arbitrarily blocked roads and wrecked havoc on motorists and adjacent villages.

“Bama -Kelani-Pulka-Firgi general areas were hitherto faced with incessant insurgents’ attacks and lootings which cast fear and anxiety among the populace”, it added.