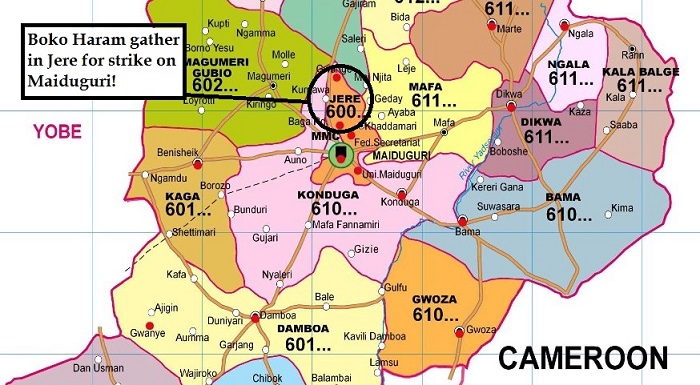 STAY TUNED TO THIS PAGE FOR UPDATES ON THIS BREAKING NEWS

Impeccable sources within the Nigerian highest level intelligence division in Abuja have informed NewsRescue that a Boko Haram strike on Maiduguri is imminent, any minute now!

The Borno military command has requested support and directive to counter this strike, but the Federal Government continues to refuse such order and support, our sources revealed.

Sources further revealed that Boko Haram has moved most of its infantry to Jere LGA, bordering Maiduguri, where they are plotting their attack on Maiduguri, the State capital any moment now.

The terrorists have moved their formations and left little defense in most towns including Bama at the moment. These towns are open to Nigerian military and Civilian-JTF counter attack, however not without proper defense of Maiduguri and a first launch of devastating attack to decimate the terrorists at Jere.

According to our sources, the office of National Security, Minister of defense and ultimately, Jonathan Presidency has refused to give the go ahead to act and attack Boko Haram and prevent the fall of Maiduguri. There is a red alert. The Military is still waiting for Abuja; Boko Haram may bear down on Maiduguri from Jere any minute now.

NewsRescue deliberated the tough decision on keeping this intel secret or revealing it, however together with our top level FGN intelligence sources we concluded that since the government was as usual, refusing to act and act appropriately on clear and accurate, actionable intel pre-attack, it is best to alert the world about the government’s fore-warning of the exact details of the impending attack on Maiduguri so they do not claim they did not expect it, to preempt them and at least warn and allow the innocent civilian victims so they have a plan to defend themselves or escape.

STAY TUNED TO THIS PAGE FOR UPDATES ON THIS BREAKING NEWS