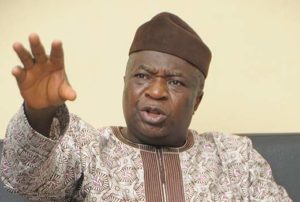 Suspected gunmen, alleged to be loyalists of Governor Ayo Fayose, on Wednesday evening invaded the Ekiti State secretariat of the All Progressives Congress.

A statement by Wole Olujobi, the media aide to the embattled Speaker of the state House of Assembly, Dr. Adewale Omirin, claimed that sporadic gunshots rented the air as the gunmen arrived at the party’s secretariat.

The heavily armed men were said to have come in four Hilux vans and a car.

Party flags and posters of APC candidates were allegedly damaged.

Olujobi said shortly before the gunmen arrived, streetlights along Ajilosun Street, where the APC secretariat is located, were switched off.

The hoodlums were said to have wounded the security man at the gate of the APC office.