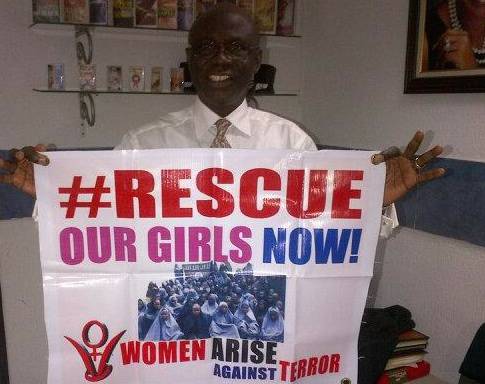 Serving overseer of the Latter Rain Assembly, and Convener of Save Nigeria Group (SNG) Pastor Tunde Bakare has explained that he smiled over the prolonged hostage-status of more than 200 schools girls abducted from their school in Chibok, Borno State – because he trusts that God is greater than the dreaded Boko Haram sect and Nigeria’s Federal Government.

Pastor Bakare was responding to a correspondent of SaharaReporters on why he had to smile over worrisome issue of terrorism in a photograph that was shared on the social media today.

In the photograph, Pastor Bakare displayed a banner in support of the campaign calling on the Nigerian government to rescue the abducted school girls.

The banner has the inscription “Rescue Our Girls Now!”, a campaign by the Women Arise movement, led by prominent Nigerian female activist, Joe Okei-Odumakin.

“I smiled because God is bigger than Boko Haram and the Federal Government of Nigeria. He is in heaven and us on earth,” said the radical preacher.

“To the question why do the heathen rage and why do they imagine vain things, the Kings of the earth plot together against the Lord and against His anointed. God’s answer in Psalm 2 will shock you. It says he that the siteth in Heaven shall laugh, and that was my posture in the photo,” he further stated.

Then he added; ‘Where God cannot rule, He will over rule.”

Over 200 school girls were abducted from their dormitory in Chibok, Borno State, more than four months ago. Citizens and Civil Society organisations had since been mounting pressures and calling on Federal Government to rescue the victims. Although the Federal Government had earlier denied any girls were abducted in Chibok as widely reported, President Jonathan later acknowledged it after the dreaded sect itself broadcast a video claiming responsibility with threats to sell off the girls.

Almost five months on, apart from some of the victims who returned home on their own ingenuity and luck, all of the abducted girls are still being held captive by Boko Haram terrorists. Even so, more boys and women had been abducted after the Chibok girls incident.

Out of the various protests by citizens and social media campaigns regarding plight of the abducted girls, several social media hashtags emerged. Some of the hashtags are #BringBackOurGirls #RescueOurGirlsNow #SpeakAgainstTerror #NigeriansAgainstTerror
#EndTerror and many more.

Reacting to questions on why her organization had created a separate hashtag for the movement in place of the widely referred #BringBackOurGirls, President of Women Arise, Dr. Joe Odumakin said; “We had begun it in the streets and were not aware other ones were going on in the social media”

Okei-Odumakin said her organization had issued a press statement a day after the abduction on  April 14th, and had called on the Federal Government immediately to rescue the victims.

“We mobilized and went on the streets four days after with the demand that Government rescues the girls as is our practice to go on the street. I became active on Social Media only very recently and had to begin putting up our demand also on it and it is our believe that Government has the duty to rescue the victims from the terrorists and ensure protection of every citizen”, she said.

“Nigerians must know that this is not a competition but a clarion call for everyone and I want to encourage Nigerians to come up with more of this both online and offline as long as it is towards same goal of ensuring that the Federal Government does not forget the Chibok girls”, she added.

Although more Nigerians have called on the government to secure release of the girls and ensure they are unhurt, the government despite claiming knowing the whereabouts of the girls hasn’t been able to rescue any.
Two days ago, a former Minister of Petroleum of Nigeria and a kinsman to President Goodluck Jonathan, Professor Tam David-West declared during an interview with SaharaTV President Jonathan inability to  rescue the abducted girls should lead to automatic disqualification for his aspiration to return to power in 2015.