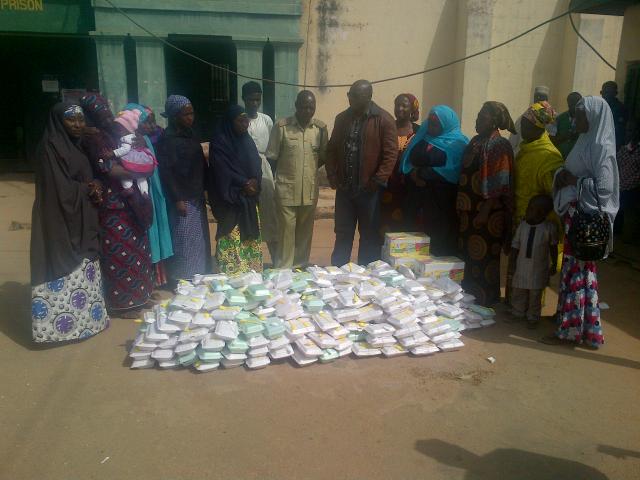 A Muslim Woman Hajiya Maryam Abubakar fed about 500 Christian inmates in the spirit of Christmas and New Year celebration.

According to Hajia Maryam, she did that to show love to Christians who are  incarcerated.

Speaking to newsmen at the gate of Kaduna Prison, Maryam who was received by the officials of the prison in the state said the food was cooked to join Christians in celebrating birth of Jesus Christ.

“We fed them in the spirit of togetherness and to join them in celebrating birth of our noble prophet Isa (AS) or Jesus.

“I want them to have a good taste of food with beef different from what they are offered inside the prison.

“I want my brother and sister Christian inmates to know that today is Christmas. We only cooked for 500 inmates,” she said.

She appealed to Muslims and Christians to learn to live in peace.

In his remarks, officer in charge of Kaduna Prison, Mr Tukura Yuhana commended the effort of the woman.

“We are really happy and surprised for her gesture towards the inmates.

“For a Muslim woman to feed about 500 christian inmates shows that we need to emulate her so as to continue living in peace and harmony in the state,” he said.

Similarly, NewsRescue gathered that the Christians Association of Nigeria Youth Leader Mr Diji Haruna Obadia during  on Boxing day organized a reception for Muslim youth in the spirits of togetherness.

“We are happy for the love showed to us by our Muslim brothers during Christmas.

“Such a gesture will no doubt cement the relationship between Muslims and Christians in the state,” he said.