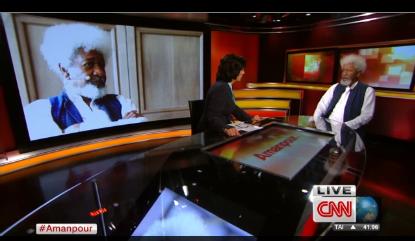 By Mick Krever, CNNThe search for more than 200 girls in Nigeria is now “beyond the capacity” of the government and needs international support, Nigerian author Wole Soyinka told CNN’s Christiane Amanpour on Tuesday.“This is a government which is not only in denial mentally, but in denial about certain obvious steps to take,” Soyinka, a Nobel laureate who is often referred to as the conscience of his nation, told Amanpour.“It’s one of those rather child-like situations that if you shut your eyes, if you don’t exhibit the tactile evidence of the missing humanity here, that somehow the problem will go away.”

It is not just “a Nigerian problem,” he said.

“I’m calling for the international community, the United Nations – this is a problem. This is a global problem. And a foothold is being very deeply entrenched in West Africa.”

The search for the girls, who were kidnapped by the Boko Haram terrorist group on April 14, has seen little progress.

The issue, Soyinka said, has been addressed “very late and very cursorily.”

Amanpour had scheduled a live interview with Nigerian Information Minister Labaran Maku on Tuesday; Maku failed to show up in time for the interview. He later spoke with CNN’s Isha Sesay.

A man claiming to be Boko Haram leader Abubakar Shekau said in a newly released video “I abducted your girls. I will sell them in the market, by Allah.”

Soyinka referred to Shekau’s video as a “charade” and “gleeful obscenity.”

The U.S. said on Tuesday that it had offered, and President Goodluck Jonathan had accepted, an offer to discuss American aid in finding the girls.

“President Jonathan should have asked for it from the very beginning,” Soyinka said. “I don’t believe in false pride.”

Why, Amanpour asked, does Soyinka believe Jonathan is in denial?

“It’s not only he. It’s the advisers around him. It’s a certain section of the nation, some of whom enjoy for various reasons a nation in a state of chaos. They profit by it, and in fact some of the, are guilty of provoking the situation.”

“The person who has no excuse is the president of the nation.”

The problem, he said, has been festering for years.

“There have been numerous incidents like this,” he told Amanpour; the 2011 Boko Haram bombing of a United Nations compound in Abuja and extremist unrest over a 2002 beauty pageant being just two examples.

“The pinpricks you’ve seen all over the world are consolidating into a situation of internal war – insurrection by this group.”

One need only look at the history of Algeria or the Taliban’s rule in Afghanistan to understand what is happening, he said.

The response must be rapid, he said.

“Abduction, terrorism, suicide bombing – these are very difficult situations to deal with. But they are not unique.”

“Where it will end, I do not know. But one thing is certain: The president and his government cannot sleep easy after what has happened to Nigeria.”