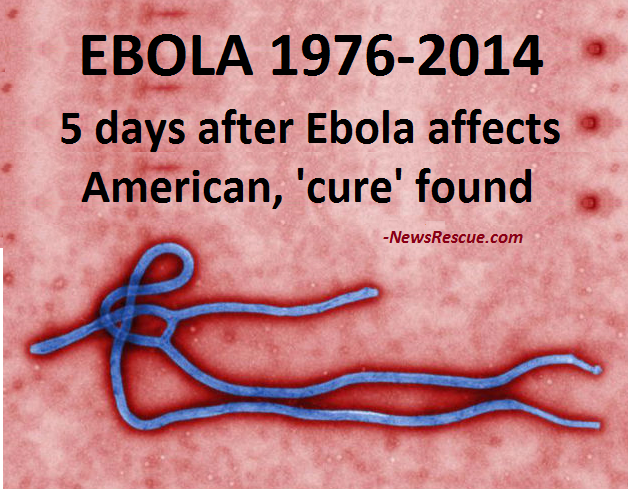 I had suspected this might be the case. Disease like Ebola are potentially easily cured using serum. Here’s the idea. Someone gets the disease and survives, and their body now produces products that give them an immunity. So, you take a bunch of their blood, clean it up as best you can, and inject the serum (the cleaned up blood, to oversimplify) with these immune products, in to a person with the disease. That stops the disease, at least some of the time. The early history of the discovery of many nasty viruses involves several stories like this, where a researcher or physician is infected, seemingly likely to die, and is given a serum and lives.

The serum treatment is potentially very dangerous because it can include who knows what from the other person’s blood. But it is quite reasonable to suggest that we can make a product that is based on serum that is clean and effective. In this case, specific products were obtained from infected mice.

And, apparently, there is such a thing, it is a secret, and it is reserved only for select individuals (because there probably isn’t much). Oh, and it is totally experimental and until now, never before tried on humans. From CNN:

Three top secret, experimental vials stored at subzero temperatures were flown into Liberia last week in a last-ditch effort to save two American missionary workers who had contracted Ebola, according to a source familiar with details of the treatment.

A representative from the National Institutes of Health contacted Samaritan’s Purse in Liberia and offered the experimental treatment, known as ZMapp, for the two patients, according to the source.

…In the monkeys, the experimental serum had been given within 48 hours of infection. Brantly didn’t receive it until he’d been sick for nine days.

The medicine is a three-mouse monoclonal antibody, meaning that mice were exposed to fragments of the Ebola virus and then the antibodies generated within the mice’s blood were harvested to create the medicine. It works by preventing the virus from entering and infecting new cells.

Brantly asked that Writebol be given the first dose because he was younger and he thought he had a better chance of fighting it, and she agreed. However, as the first vial was still thawing, Brantley’s condition took a sudden turn for the worse.

Brantly began to deteriorate and developed labored breathing. He told his doctors, “I am going to die,” according to a source with firsthand knowledge of the situation.

Knowing his dose was still frozen, Brantly asked if he could have Writebol’s now-thawed medication. It was brought to his room and administered through an IV. Within an hour of receiving the medication, Brantly’s condition was nearly reversed. His breathing improved; the rash over his trunk faded away. …

Writebol also received a vial of the medication. Her response was not as remarkable, according to sources familiar with the treatment. However, doctors on Sunday administered Writebol a second dose of the medication, which resulted in significant improvement.

This is an untested drug that is not available for general use. But, it could be. All it takes is deciding to spend the money and effort on developing it, rather than simply ignoring Ebola because it is not Malaria.

If I was President Obama, I’d simply order the military to take this to the next step. The US Army has done as much research on Ebola as any other agency. It would be a simple matter to move a few budget items around and allow USAMRIID organize, using its own people and consultants, to move forward (because you know the present Congress is never going to authorize spending money on helping sick people in Africa, even though this is also very much about the United States.

It is the right thing to do.