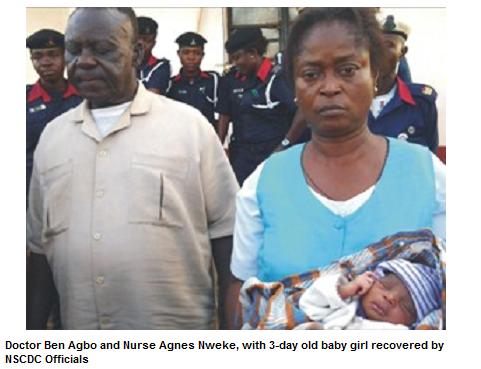 The 74-year-old founder of the “maternity home,” said that, as part of the humanitarian service of the clinic, he had been selling babies to people in need of them for the past 10 years.

It seems there is no end, at least in the nearest future, to the booming baby business in Enugu State. The illegal business is believed to have existed for many decades undiscovered. In spite of frequent raiding, arrest and detention, and sometimes prosecution of suspects by security agencies, those behind it appear unrepentant.

Last Wednesday, men of the Nigeria Security and Civil Defence Corps ( NSCDC) in Enugu State, clamped down on a clinic said to be a ”business empire” for the sale of newborn babies to anxious buyers. This clinic, our reporter was reliably informed, has been in this illicit business for the past 10 years. It was gathered that the proprietor of the clinic, Dr. Ben Agbo, had had several encounters with the police, but would, however, wriggle out of the hook.

But speaking to Sunday Trust, he said, “I had one case at the state Criminal Investigation Department (CID); and that was the only case I have had with the law. I have been doing my business without disturbance.”

Located at 61, Agbani Road, by Abagana Street in the Coal Camp area of Enugu metropolis, “Moonlight Maternity Home,” is in a rather ancient, and not very well maintained bungalow, apparently to conceal the business from the prying eyes of passersby and neighbours.

The 74-year-old founder of the “maternity home,” who was arrested alongside a nurse, Mrs. Agnes Nweke, however, said that, as part of the humanitarian service of the clinic, he had been selling babies to people in need of them for the past 10 years.

Officers of the NSCDC equally rescued a 3-day-old baby about to be handed over to a prospective buyer.
They also arrested a certain Mr. Joseph Eze, 37, a commercial bus driver who resides in the same premises. They, however, said he would serve as a witness during the prosecution of Dr. Agbo. Eze told reporters that he had seen some pregnant teenage girls in the clinic, but wondered why they patronised the doctor in that manner.

Sometime last year, I asked a former nurse with them how they managed to get those babies they sell and the mothers that delivered them. Her reply was that their mothers were young teenagers and singles who are victims of unwanted pregnancy.

Instead of abortion, they choose to deliver for adoption. Recently, I have seen about three of those young girls in the maternity,” Eze said.

“I am not really impressed with this type of case I am having now; but I take it as temptation. My business is not all that illegal; but if it is said to be illegal, that’s okay,” Dr Agbo told reporters.

Asked about the whereabouts of the mother of the 3-day-old baby found in his clinic, he said she went to seek for assistance.
He continued, “The baby was delivered in my hospital last Saturday. I am not usually in the hospital on weekends, but the nurse who assisted in the delivery told me that the baby’s mother said she would come back to claim the baby. Since then I haven’t seen her. The mother’s name is Mrs. Mercy. I don’t know her surname. The fact is that she is not our patient, she just came in. She is an outpatient.

“I have not paid the mother yet. If she comes back and requires payment, I will pay her. And she will pay the hospital bill when she comes back to claim the baby.” He added that his charges were between N100, 000 and N120, 000 per child.

He explained that his action was informed by the fact that he was against abortion and dumping of unwanted babies; adding that such practice by young girls was a “big sin,” and he would not part of it. But his nurse, Mrs. Agnes Nweke contradicted her boss’s claim of being against abortion. She said, “Initially, we started with inpatient, outpatient, and after that he started to do abortion.”

“When he had a case with the police and “Social Mother;” and the welfare organisation wanted to take us to court, we “settled” the police and we were bailed. The hospital was shut down by the Ministry of Health sometime last year and we had to do the normal registration. Then I was on leave to treat my injured leg. It was just last week that I resumed work. The doctor had advised me not to overwork myself lest my blood pressure rise. That had been the nature of work here. I don’t normally come to work on Saturdays and Sundays, so I know nothing about the baby and her mother.”

Married to a police officer, who she said worked with the Commissioner of Police, Enugu State Command; Mrs. Nweke said she was not sure if her husband knew the type of business they did in her place of work. She was also not sure if the business is legal or illegal, saying, “I can’t tell whether it is legal or not. I am an employee.”

State commander of the NSCDC, Nathaniel Ubong, who paraded the suspects before reporters, said they were arrested following a tip-off and after a tedious surveillance by his men around the said maternity home.

Some of the handwritten applications and other records of transaction made available to reporters showed that some babies were sold at N500, 000. There were also some records where Dr. Agbo’s clients deposited up to N200, 000 for a baby boy, promising to pay the balance when the child was handed over to them.

Ubong said the proprietor would be prosecuted after investigation.

Furthermore, on Tuesday, May 14, 2013, operatives of the anti-kidnapping unit of the Enugu State Police Command arrested six pregnant young girls who were haboured in a house at the Ogui area of Enugu metropolis. The girls were kept in a hideout by members of a syndicate who specialise in this business. They have, however, been at large since the bubble burst.

Also, the police recently rescued a 12-day-old baby, reportedly stolen from his mother and subsequently sold to a childless couple. Right now, four suspects, including the sellers and the couple who were said to have bought the baby, are being interrogated by detectives.

Confirming the arrest of the six pregnant girls, the public relations officer, Enugu State police command, Mr. Ebere Amaraizu, said in a statement that the girls were arrested at No. 7, Anyansi Lane, Ogui, in Enugu North Local Government Area of the state. Amaraizu said the girls, whose ages ranged between 16 and 17, had negotiated with people that would buy their babies after delivery. But it could not be ascertained at press time, how the girls were put in the family way.

Amaraizu also confirmed the arrest of three other persons in connection with the crime, saying that investigations into the matter are ongoing. According to him, the three persons arrested include Lami Lasu, Isha Musa and Anthony Chigbo.

Similarly, one Mercel Agu and his wife, Callista, have been picked up by the police for allegedly stealing a 12-day-old male baby from its mother, Chika Nwokolo, after delivery at an unnamed maternity home on Ebony Paint Road, Awkunanaw, Enugu South Local Government Area of the state. The spokesman of the police said the arrest of the couple led to the subsequent arrest of two others: Mrs. Stella Nebo and one Patrick Ugwu, said to be linked with the crime.