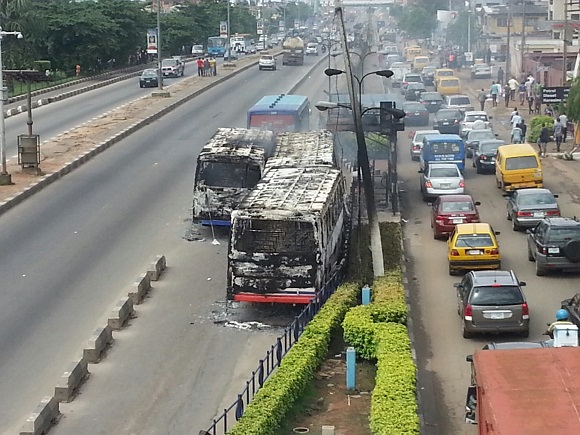 First, an apology: I am sorry for all the times when despite overwhelming evidence to the contrary, I have tried to give the Nigerian Army the benefit of the doubt.

When satellite images released by Human Rights Watch showed the destruction in Bama last year after soldiers razed over 2000 homes, I still gave the benefit of the doubt. “What if we are wrong? Let’s support our military!” I told people.

I was touched but did not care much about the 32-year old fisherman interviewed by Human Rights Watch who said, “We had heard the soldiers say before the attack that since you people are not cooperating with us and are hiding your brothers, we will treat you as one of them. Everyone heard them say this. They were saying it in the open.”

That man lost his uncle who had a bad leg and could not escape when soldiers attacked and burnt the houses after a Boko Haram attack. But I still tried to make excuses.

Even when my Twitter friend, Salihu TankoYakasai (@dawisu) shared stories in April last year,claiming that soldiers in Kano have turned into “an even deadlier enemy than Boko Haram… and had become human exterminators,” I silently accused him of exaggerating. Somewhere in my mind, Bama and Maiduguri and Kano… were all too far for me.

In the last few months, I have become more critical of the army. After their ridiculous lie that they had released the abducted Chibok girls, and the back story which led to the mutiny at the Maimalari Barracks in Maiduguri, I knew my support could no longer be unconditional. I began to take anything the army said with a pinch of salt.

Today, I saw firsthand the Nigerian Army in action in Lagos… I have never seen anything like it in my life.

A soldier was knocked down and killed by a BRT bus in Lagos. Soldiers in army green stormed Ikorodu road where the buses ply and first thing they did was to close the road from Palmgrove where the accident reportedly happened. The closure immediately caused a massive traffic gridlock. But that was just the beginning.

The soldiers began attacking BRT buses on the road. They vandalised the buses, broke the glasses and windscreens, and deflated the tyres. I got a call about the incident and immediately went to see for myself.

READ: These Are Photos Of Just Four Of The BRT Buses Set Ablaze By Soldiers Today

The first scene that greeted me at Palmgrove was a journalist being viciously beaten by the soldiers. “Please I’m a journalist,” he kept saying, pleading with them. They did not care – a female soldier led that attack. The offence of that journalist was that he was bold enough to take photos of the vandalised buses. His ipad was seized and he was so badly brutalised that he had to be rushed to the hospital.

Soldiers demanded that Nigerian civilians passing along Palmgrove raise their two hands in the air, as though we are in a war situation. No one was permitted to hold his phone in his hand or receive a call. Not even those driving-by in their cars were spared. A young soldier slapped a man making a call inside a bus because he disobeyed an order he was not even aware of.

Things got even worse. Some of the onlookers told me that a senior officer came by and directed the soldiers on ground to burn the parked buses. I did not see that officer but I saw soldiers as they went into two nearby petrol filling stations, ordered the attendant to fill some kegs with petrol and carry it to a spot where one of the buses was parked. I watched as soldiers got into the bus and emptied the keg of fuel inside it right there by the side. Then they struck a match and it was in flames.

On either side of that burning bus, there was massive traffic and cars (including fuel tankers) were moving slowly. The soldiers did not care and commuters prayed as they moved past. They did not even have the luxury of turning back as the road was blocked.

I was there when a Peugeot car with a tinted glass and plate number NA-911934 arrived the scene and two young-looking officers stepped out. I do not know much about army ranks but a friend by my side saw their stars and cap and told me that one was a captain and the other a Lt-Colonel. I went close to see if I could get their names but they had removed their name tags of course. The other officers recognised the presence of their bosses with the usual greeting as the two men strutted calmly away from my spot.

I am sharing the entry of those officers because some people are currently trying to frame this story on social media as though it was something that was done by a few “disgruntled” soldiers in the rank and file. That is not and cannot be true. Those soldiers could not have been so bold to stay there for over 5 hours and all that time, there was not a call from their superiors asking them to desist. All of Lagos had heard the news, yet people who push this theory of a “few disgruntled soldiers” want us to believe that the bosses had not heard and could do nothing. That’s illogical!

At the Palmgrove bus stop, four BRT buses were parked, just in front of the MRS filling station. I saw a female soldier shout, “We suppose start one smoke from there.” I reached her and said, “Aunty please I beg, this is so close to the filling station, it might cause an explosion.” She couldn’t believe what she was hearing from this small, uniformless person: “If I send you slap ehn. Gerraway from here,” she told me, and I ‘gorrawayed.’

The soldiers got petrol, emptied it inside the middle bus and set it on fire. Before long, the four buses were on fire.

I and a few friends wanting to know the exact spot the incident happened, went to speak with security men guarding the entrance into the Palmgrove estate. They told us that they did not know what happened but that all of a sudden they saw a crowd rushing into their estate (the crowd was being chased by soldiers.) The guards quickly rushed to close the gates against the onrushing crowd. Apparently the soldiers believed that the BRT drivers had run into the estate and the guards were attempting to close the gates to shield them. They beat up the three elderly guards. One of them told us he had pains on his arms and legs, the other was still in shock, the last one was in the hospital.

We immediately left for the Ultima Medicare Clinic at 2A Cappa Avenue, Palmgrove where the third guard was admitted but we were denied entrance. According to them, “Chairman says it is an internal matter.”

By 1pm, when I left the scene, the soldiers were still there, most of them now seated in their Hilux vans with “OP MESA” written on them, others controlling the traffic, others seizing cameras, and others pushing back onlookers. Their colleague had died (some people I spoke to said the dead soldier was supposed to get married tomorrow and some said he was a colonel; I don’t believe either). Either way, he was gone. His colleagues will never see him again, but as I left, I noticed a group of soldiers, huddled together, laughing – it’s been a good day’s job. They had put the ‘fear of god in hapless civilians.’

On a final note, as I was writing this, I saw an update from Musiliu Obanikoro, the minister of state for defence (who was not at the scene), saying he has been briefed by the chief of army staff (who was not on the scene) that “some thugs in the area took advantage of the incident to wreak havoc and the military has taken necessary steps to restore peace and forestall further breakdown of law and order.” Obanikoro knows that he is lying, but he won’t stop – it’s just how they roll. Before there is even an investigation, there is already a cover-up.

I know that there are a few good men in our military and I thank them for all the times they have discharged their duties with uprightness and professionalism. But all over the country, it is now clear that there are certainly more lawless men in our army than responsible individuals. An army that believes in jungle justice is a perversion. The Army I saw today was not that glorious army which we used to rave about when they go on foreign missions and who people say are the most professional on the continent. The army I saw was a gang of buccaneers, a vicious rampaging locust-like evil on green that should be utterly ashamed of itself and that is in much need of a reform. But I am not hopeful.