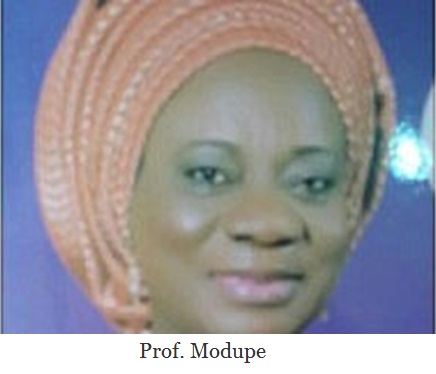 A former deputy governor of Ekiti state, Prof. Modupe Adelabu has said that the state governor, Ayo Fayose is obsessed with Buhari.

Speaking with NAIJA CENTER NEWS, Prof. Modupe said the governor and other members of the Peoples Democratic Party (PDP) are afraid of Buhari because of his stand against corruption in the country.

She said there is no amount of advise, statement you can make to change Fayose pathological obsession.

She added. “It’s obvious Fayose is afraid of Buhari. This is not the first time there is an election in this country, but the fear you can see, is everywhere, the ruling party is afraid of Buhari presidency because he is particular about corruption. PDP do not want the change we are anticipating because they will loose illegal gains they have made over the years, if they are not there, they will not make the country dry anymore.

“With the present structure in the country, we have lost Nigeria, our names, our value in fact everything that can make a democracy thick. Nigerians are no longer proud to be Nigerians, there were time in the world you want to be celebrated as a Nigerian. Before now wherever i go, i wear Ekiti T-shirt, but now i am ashamed to do it.

Asked why she has not been saying much on the happenings in Ekiti State, the former governor said she had adopted “sit and look” tactics as there is no need to engaging in an unhealthy talk over the radio or television and instituting lies. “We are waiting for any good thing that can yield any positive thing for the people of the state. We are moving forward, we are thinking of how to move Ekiti State out of this dangerous trend. Only few newspaper will listen to your views, so why don’t you just sit and plan instead of talking and engaging your energy on things that will not assist the state.

Referring to the governor without mentioning his name, Prof. Modupe said “People make so much noise, they attract unnecessary attention to themselves and when you are making noise, others are working. People of Ekiti state are saying this man should settle down and work instead of engaging  Fayemi, Buhari or Obasanjo, he should settle and work, his work will speak for him.

All i know is that we want a change. Anything but a change because we are fed up.

“If Buhari was sick as speculated,  will he be at the hospital and at Chatham’s house at the same time in London? 70 percent of people working go for check up. It is his private life, we go to the hospital every month to check our blood pressure and other things. Buhari visited 36 states non stop, are we going to say he was sick? Some said he went to London for health issues, maybe he delivered his lecture at Chatham house from hospital (laughed). So for me, i think the man is strong enough to rule this nation. Anybody could be sick, there was a time the wife of the President was sick, we were not celebrating her sickness. People who are talking now, shouting should have their head examined, they are more sick than people in the hospital. My President in waiting is healthy.

“How many people,  nationally and internationally who are very old? What has age got to do with it? Even in Nigeria nation, people were old and they did well. Luckily we are not going to choose his cabinet for him. Even people who are not old in the country, are they delivering the dividend of democracy in the country?

“I am not apologetic, democracy is different from autocracy. He took over as a military leader in the past, this is democracy, he cannot do anything without people watching him, without the national assembly. He cannot wake up over night and make a law, we are no longer ruling by degree. I have said it before, the past is gone, let us talk about the present and the future. A military ruler is different from a democratic ruler. Military is no more in vogue in Africa.

On whether Prof. Osinbajo is stepping down after election, the former deputy governor said ” Do you know Prof. Osinbajo, have you read his pedigree? Do you think it is possible? Everyday, they bring in new thing to discouraging people from voting Buhari. Any person can read between the lines, anyone with objective mind will know all these are lies. Why are they anticipating the result of the election? why are they afraid?

Prof. Modupe also said that she is confident that Buhari will win the election if it’s free and fair election.