In an article full of evident lies, the newest PDP spokesman attempted to defend accused removed army chief, General Ihejirika of his association with Boko Haram. Below are his statements with evidence of his lies in bold, quote responses. We are confused why the ex-aviation minister will be so desperate as to risk his freedom now and in the future in attempt to defend Boko Haram terror group.

Ihejirika was recently named as one of the Boko Haram’s top sponsors, by Australian negotiator, hired by President Jonathan of Nigeria to negotiate with Boko Haram, Stephen Davis, but Fani-Kayode said the Australian would have to put his money where his mouth is and offer up actual evidence.

Fani Kayode Lies: “No one should be spared if the evidence is really there but I must say that I find the allegation that the former Chief of Army Staff, General Azubuike Ihejirika, is somehow involved with Boko Haram a little far-fetched firstly because he spent so much of his time, energy, career and resources fighting that organisation; secondly because that organisation killed so many of his own officers and men and thirdly because he is not a Muslim but a Christian.

TRUTH: The entire world knows how at each instance of successful Boko Haram attack, the locals report that the army under Ihejirika first withdrew guarding troops suspiciously hours or few days before Boko Haram came. This troubled Nigeria for the past four years and is clear, irrefutable evidence of Ihejirika’s involvement in aiding Boko Haram carnage. If the General did not order these pre-attack troop withdrawals, who did and why did he not court-martial that junior? General Ihejirika resisted fighting Boko Haram. During his tenure he refused several demands by the Nigerian army fellow top leaders requesting for needed troops to defend the people of Borno. We exposed this in our intelligence article of May 13th, 2013 when we and we alone were pushing the President of Nigeria to side-step Ihejirika, declare a State of emergency and send battaions to the north, which Ihejirika vehemently refused. At this time, Boko Haram had completely taken over most of Borno and Ihejirika was just happily looking. Read more: Nigeria: Top Level Sabotage Behind Military and Civilian Casualties in Boko Haram War – Military Sources [PART 1]

The JTF in Maiduguri through the Chief of defense(COD), Vice Admiral Ola Sa’ad Ibrahim, have been requesting for two battalions to complement the forces on the ground- to deal with the increasingly coordinated menace, but their pleas fall on the deaf ears of the Chief of Army Staff(CAS), General Azubuike Ihejirika.

Fani Kayode Lies: “I have never heard of a Christian trying his best to help or assist an organisation to establish an Islamic fundamentalist caliphate which is committed to wiping out the Christian faith and killing every Christian, every secularist and every moderate muslim in his country. It seems to me that this is an absurd notion and that it really doesn’t make any sense but if the Australian has any hard evidence let us see or hear it.

TRUTH: Boko Haram is not on a mission to establish a caliphate; they only dubbed that idea this month copying ISIS in Iraq. Boko Haram has only been on a mission to destroy the north which they have been very successful in. Many Nigerians, more especially anti-Muslims of whom General Ihejirika is accused of being a part as is Fani-Kayode, love the idea of seeing the north in flames and shambles. We read the celebratory words of such wicked Nigerians on faceBook everyday. Ihejirika is accused of being their agent for this mission, transferring Nigeria’s military equipment to Boko Haram to continue to massacre the north and displace the farmers while for the past four years he has been in charge, he allowed them grow and never bombed these tanks and APC’s they got from him out of commission.

Fani Kayode Lies: “These are very serious allegations and I would be interested in seeing the hard evidence, if any, that he claims to have. I have always said that I believe that anyone, no matter which political party that person is in and no matter how highly placed or powerful that person may be, that is involved with Boko Haram ought to be captured, caged and brought to justice because I regard such people as nothing but bloodthirsty beasts.”

TRUTH: If you wanted to see evidence you will not tamper with the case with your preposterous, glaring lies.

Speaking on potential political affiliations with Boko Haram, FFK said it was more likely that APC was involved with the activities of the sect.

Fani Kayode said: “These individuals know very well that the APC as a party have far more sympathy for Boko Haram and far many more of their leaders and members have spoken up for and in defence of Boko Haram than anyone else. Just yesterday in Thisday newspaper one of them said that the Senator from Borno State that was facing terrorism charges was a PDP member. This is not true. The Senator that he was referring to is Senator Ndume and he is in the APC and not the PDP.

TRUTH: It is PDP that Azazi accused of being behind Boko Haram, and late/killed General Andrew Azazi was Nigeria’s NSA, the only office that actually knew the truth. It is PDP that has sympathy for Boko Haram. It was PDP lawal Kaita and him only that said they will make Nigeria ungovernable. It is PDP chairman, Bamanga Tukur that said “Boko Haram is fighting for justice, Boko Haram is another name for justice.” It is PDP Vice President Namadi Sambo that used to communicate with Boko Haram along with PDP Senator Ali Ndume. Now over to FFK to provide a singel evidence from Nigeria’s SSS and not from his fellow crew of Jonathan paid media spinners that implicates APC members of being sympathetic to the cause of Boko Haram…. 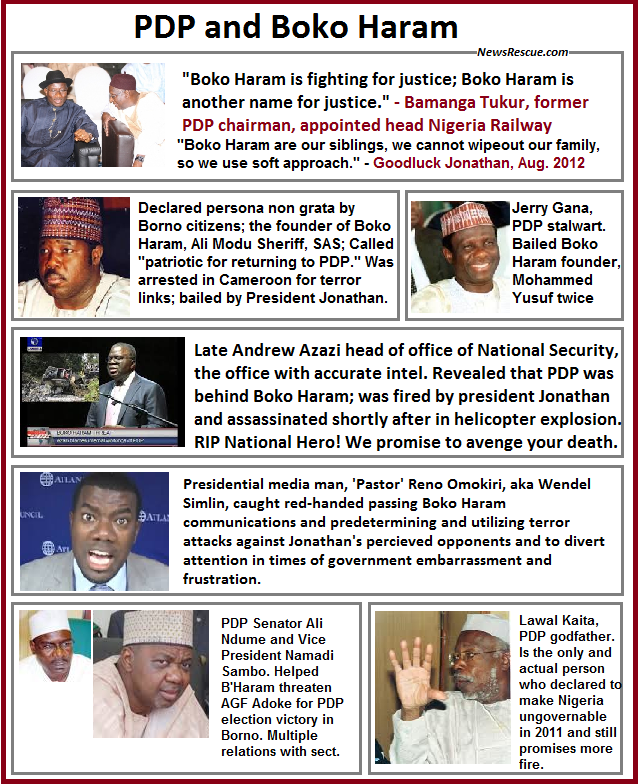 Fani Kayode Lies: “Quite apart from that, certain things need to be noted. Let me remind those that are pointing fingers at the PDP now that it was not a member of the PDP or the federal government that said that Boko Haram should not be proscribed as an organisation, even after they had slaughtered no less than 15,000 innocent Nigerians in cold blood, sometime last year. It was rather the official spokesman of the APC, Lai Mohammed, who said so”, he insisted.

TRUTH: It was president Goodluck Ebele Jonathan that fought the US and vehemently rejected the US proscribing Boko Haram as a terrorist organization. Let President Jonathan explain and defend his actions; he is not a child. When he decides to steal billions of dollars, he does not claim anyone influenced him. When he decides to fire a CBN governor he has no power to, he does not claim to be under any influence. Protecting Boko Haram was his wish and desire and only he is to blame for it: See:NewsRescue–REVEALED: Jonathan Govt. Rejected Designation of Boko Haram as Terror Group – US

Fani Kayode Lies: “It was not the PDP or any member of the federal government that told the world only last year that they were against the declaration of a State of Emergency in Borno, Yobe and Adamawa states, that an attack on Boko Haram was an attack on the north and that Boko Haram members ought not to be killed but rather they ought to be pampered, granted amnesty and treated in a gentle manner like the Niger Delta militants. It was the leading Presidential aspirant and one of the two co-owners of the APC, General Muhammadu Buhari that said so.”

TRUTH: It was only a NewsRescue report that pushed Jonathan to declare a state of emergency. Ihejirika opposed it and so did Jonathan till the damning NewsRescue intelligence reports, Nigeria: Top Level Sabotage Behind Military and Civilian Casualties in Boko Haram War – Military Sources [PART 1], May 13, 2013 and Nigeria At War, May 8, 2013 came out in early May 2013 and went viral. Even then, all PDP men and spokespersons till the minute of declaration of the SoE, were vehemently rejecting and denying it. Does FFK need mind juggling? PremiumTimes reported on May 13, 2013: No plan to declare state of emergency in northern states, says PDP