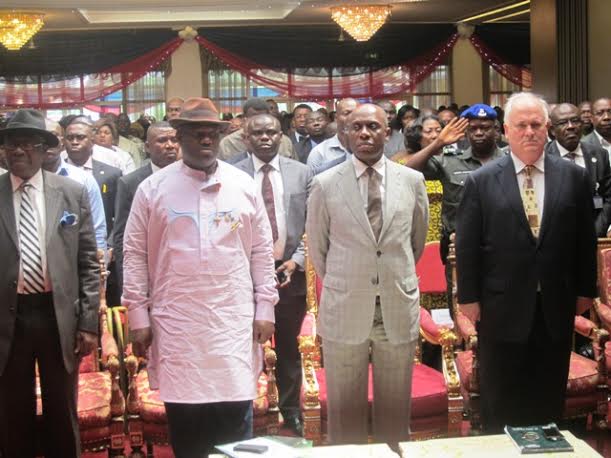 The All Progressives Congress (APC), Rivers State Chapter, has charged Nigerians to rise and put an end to the wanton looting of their common patrimony by greedy cabal intent on perpetuating its evil grip on the country’s treasury, totally insensitive to the plight of millions of suffering Nigerians.

“Nigerians can no longer afford to stand aloof and suffer in silence, especially in view of the disclosure by suspended Central Bank Governor Sanusi Lamido Sanusi that the missing $20 billion oil revenue has been shared by a cabal, which explains why Sanusi was hastily suspended by the Presidency so as to frustrate efforts to trace those who looted the money,” Rivers APC said.

The party associated itself with the position of Rivers State Governor, Rt. Hon. Chibuike Rotimi Amaechi, who observed at the International Conference on Democracy and Good Governance held yesterday, 11th March, 2014, in Port Harcourt, that democracy can only grow in the country when Nigerians, irrespective of religious, ethnic or political affiliation, recognise that elected leaders are accountable to them and thus initiate ‘citizenship action’ to get their leaders to account to them on how the country’s funds are used.

“Like Governor Amaechi, we, too, are disappointed that both the National Assembly and Nigerians are not asking questions about why a whopping sum of $20B should develop wings and our leaders are not doing anything to account for it. We are in agreement with Amaechi that until we confront our leaders to be accountable to us our leaders will continue to loot our treasury with impunity. Therefore, seeing that our leaders have hardened their hearts as far as corruption is concerned, Nigerian citizens must arise as one to save our nation,” Rivers APC said in a statement issued by the Interim State Chairman, Dr. Davies Ibiamu Ikanya.

The party commended Governor Amaechi and the Rivers State Government for the successful hosting of the International Conference chaired by a respected Jurist, Hon. Justice Adolphus Karibe-Whyte (rtd.), and graced by distinguished international good governance promoters such as His Excellency John Bruton, former Prime Minister of Ireland, who was visiting Nigeria for the first time, and His Excellency, Jack Straw, former British Foreign Secretary, and moderated by Prof. Steve Chan of University of London.

“In addition to commending him for the successful hosting of the International Conference, we also wish to congratulate Governor Amaechi on the unanimous verdict of both the Lecturers and Panelists that he is an example of what a good democrat should be. We join these renowned global citizens in celebrating this rare gem for his feats in the areas of education, health and road infrastructure, among others, while urging him to continue to let his light shine for the benefit of Rivers and the entire Nigeria,” the State APC concluded.