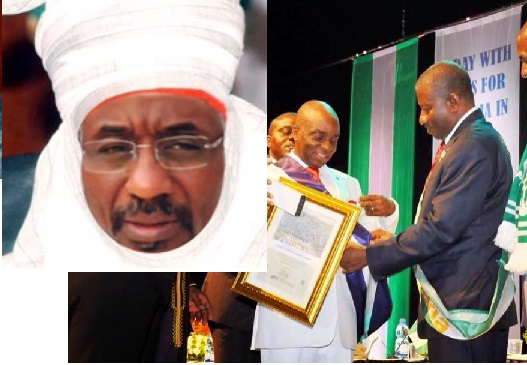 The weekend or so after The Emir of Kano, Sanusi Lamido Sanusi made a globally resounding call for Nigerians to arm themselves by any means necessary to fight Boko Haram and defend themselves, it appears Nigeria’s biggest Pastor and the President of the Living Faith Church Worldwide, Bishop David Oyedepo photocopied the same call to his Church members, though in appreciably inflammatory and divisive tone.

Bishop Oyedepo talking to his congregation the Sunday after the Emir’s call told his followers that he was ordained to lead a Christian battle against Boko Haram. He told his members to kill the terrorists or anyone that looked like them and cut their necks and spill their blood.

“God has anointed me to lead a revolution against Islamic jihadists … If you catch anyone that looks like them – kill him! Kill him and pull out his neck. I will spill his blood on the ground. What nonsense!” Oyedepo heatedly shouts to his congregation in the YouTube clip.

It appeared that the unifying call from the Emir, Nigeria’s second highest Muslim authority for all Nigerians to fight off Boko Haram terrorists who had continuous success under the presidency of Nigeria’s Goodluck Jonathan, annoyed some quarters who wished to utilize Boko Haram as a political weapon and a divisive one to pit Christians against Muslims and South against north.

The Pastor in his announcement blamed certain elements, mentioning northern, who the Nigerian President had said had infiltrated his government. The pastor cursed all those in the Jonathan Government who allowed a Boko Haram suspect to escape.

He questionably said, if Nigeria needs to divide it should, seeming to point to some misinformed sponsored view that Boko Haram was sponsored by northern elements to disrupt the nation. Boko Haram has only killed and destroyed lief in the nation’s north, never crossing to the south which makes such narrative illogical.

Boko Haram has also been found by all experts to be foreign coordinated, centered in Idriss Deby’s Chad, an ally of named Boko Haram sponsor, Senator Modu Sheriff, all close friends of Nigeria’s president Goodluck Jonathan.

It is opined that the strong call by the Emir suddenly broke the intended narrative for Boko Haram to be a tool to cause division and ethnic and religious strife in Nigeria and this led to the urgent call for the saga to still be promoted to cause disunity and suspicion. According to the Youtube dating, the video was published on the 25th of November the week after the Emir made his global string call for unity of Nigerians in battling off Boko Haram and defending their communities where the Goodluck Jonathan government had failed for the past six years.

However, in all Nigerian media Press releases, the event was said to have occurred weeks later, on December 12th. See Guardian. It is perhaps a miracle or error/mischief in collaboration with Youtube that the posting bears the date “25th November” for an event of 12th December. The video had only 1000 views when NewsRescue visited it which is technically impossible for such an inflammatory video.

President Jonathan who has been accused in a court case of orchestrating at least two bombings at the head of the Boko Haram evolution first invented the ‘blaming northern elements’ tactic which he used to secure his poll victories.

It is proposed that keeping this apprehension fired up by continued Boko Haram terror killings has been one of his chief political strategies.

Oyedepo Claims To Be In The Jonathan Government

Saying that his congregation should not mistake only the politicians to be in power, he said that  he was in fact in power in the  government.

Bishop Oyedepo seemed to join a popular controversy by insinuating that the north lacked human beings and census figures were always manipulated. Joining an argument point made due to a statement which has been found to be a lie, made by a certain colonialist, Harold Smith (Debunked). It is usually propagated by people who do not realize that the debated north is 79% of Nigerian territory and is not just the core north but extends to Benue, Kwara and Niger states below the Niger river.

In the debunking of the Harold Smith claim that they manipulated the census in his time due to the upcoming independence elections, it was proven that for all censuses before the 1956-7, those every ten years since 1921, the results were always identical with the 80% northern land mass having about 55%.