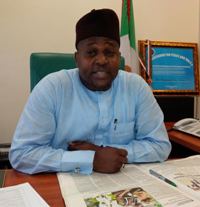 Abdurahman Abba Terab represents Bama/ Gamboru Ngala Federal constituency of Borno State. In this interview, Terab speaks on the recent attack on Gamboru, the extension of emergency rule  and why he thinks the ‘Civilian JTF’ vigilantes should be recruited into the Nigerian Army. Excerpts:

You visited Gamboru Ngala just a day after the attack by Boko Haram, can you describe what you saw?
The situation in Gamboru Ngala is a very devastating one. I think it is the worst attack we have recorded so far in the whole of the state and particularly in my constituency, which has been the hotbed of insurgency attacks. But what is most worrisome is the fact that there are pattern that this insurgency has developed and these patterns are in situations whereby the Nigerian army while on their duty posts are asked to vacate their posts for one reason or the other. And particularly worrisome was the case of Gamboru Ngala, where not a single one of them was allowed to stay at their duty posts with the notion that they have gone in search of the Chibok abducted girls on the shores of Lake Chad. And even more pertinent was the fact that the soldiers did not go there alone, they even went with the Civilian JTF, who have taken up the responsibility to defend their communities, especially the Gamboru Ngala community. I was confronted by some Nigerian soldiers who complained about orders given to them before the attack. When I presented my motion on matters of urgent national importance, I queried why the military were asked to vacate their posts saying it must be investigated by the military authorities. Because this pattern is becoming too many.
The same thing happened in Bama and in Maiduguri on the attack in Giwa Barracks. What is clear to me is that, no matter how weak the Nigerian military is, until and unless they vacate their posts, attacks don’t happen, and that I think is a serious cause of concern.

The insurgents came in 40 Hilux vehicles with an APC leading the way, which I believe with an average of ten persons per vehicles, you are having over 400 insurgents attacking the town with not a single military in their defence. We have all of us seen the bravery of Divisional Police Officer who survived, but lost 16 of his men, and also some few members of Civilian JTF who stood their ground, but could not sustain it, because the power was overwhelming. As I‘m talking to you, billions of naira were lost, because Gamboru market is an international market. They came at 1:30 pm and destroyed  the entire town, especially the market area. All trucks that were there to evacuate their goods were burnt. They carried out the attack when the market  was in the height of transactions. Most of the people were burnt alive and a lot of them killed in the presence of their family members and friends.

We have lost, at the last count over 370 people dead in Gamboru Ngala, with over 400 cars burnt with over forty something trucks burnt with all their content. Shops and houses are innumerable, and the most worrisome part is that rightfully, the people of Gamboru are very angry with the Nigerian state over this. They feel that is a clear case of neglect and they feel they are being used as a collateral damage and I believe all the authorities concerned, all of us saddled with the responsibilities of leadership must rise to the occasion and ensure that this does not happen again, and also dig into the matter surrounding the vacation of the military from their duty posts ahead of the attack.

Are the people suspecting any foul play?
That is why we have asked the authorities to investigate. Their action will justify whether there is complicity or not. But it is how proactive they come out and investigate this situation that will tell all of us the truth of the situation.

Why did the House extend emergency rule despite opposition by some North East leaders?
First of all, the case of emergency extension has been on the front burner of our recent activities and in the light of that, a lot of consultations were done both within and outside the House and this of course reached climax with the presentation of the service chiefs to both the chambers of the senate and the House of Representatives, where they mentioned, in clear view, the limitation they are going to encounter when the state of emergency is not invoked in these three states. And beyond that, the international community is coming in, and they are insisting that they must be given some legal backing for them to come and operate so as to bring this insurgency to an end. But what is important here is that this international community can be a bridge that will separate what we have just asked about the complicity if it exists, between the Nigerian military authority and the soldiers on ground. I have always tried to draw a clear line between the willingness of ordinary Nigerian soldier to  do his best on the battlefield. I have seen them, I have met them and I have discussed with them. I have seen them and met them on the battlefront, both in Bama and in Gamboru Ngala.

After that, the House of Representatives northeast caucus met with the Speaker and the leader of the Borno caucus in the House of Representatives, Mohammed Tahir Monguno came up and said so long as the political structure and the democratic structure in the state is not tampered with, in agreement with the governor whom he had discussed with earlier, that  it will give the military the powers they need for them to do the work that is before them, so as not to come and blame either the state governor or those of us at the leadership if anything happens after the withdrawal of the state of emergency. In fact, in one of the meetings,   I specifically asked the chairman House committee on Army, who is also from Borno State incidentally, and he said that once there is no state of emergency, for every operation the military will first of all have to go back to their barracks and for every operation, we have to get express approval from the President to do that.

But that argument has been punctured that similar operation had been carried out in some states, like Nassarawa, Plateau and Kaduna without declaring emergency in those states…
We asked if we would be guaranteed security specifically for my people in Bama, Ngala and Kala Balge in the absence of state of emergency, because we don’t have barracks in some of these areas, that they should be allowed to roam about, if that is guaranteed, we don’t have any problem, with their presence or not. But the chairman of the army said he can’t guarantee that.
As such, I was surprised when I read a story in your paper last week that I said if you withdraw emergency rule in Maiduguri, that people will be killed in Bama. That was not my statement. My statement was categorical about what happened in Gamboru Ngala about withdrawal of military and the subsequent attacks on our people, which means that every withdrawal of the military is an attack on our people.

There have been calls for the federal government to arm the civilian JTF, do you subscribe to that?
This brings us back to a lot of constitutional issues, from the issue of state police to the issue of national security. But from my own understanding, if you go to the United States or Israel, you find out what they call the military reserves. People can be called, given training and still live their normal lives, but they are part of the military. It was also the case on the part of Nigeria during Biafran war. The first line of the constitution stipulates that the security of lives and property of Nigerians should be the primary responsibility of the government. We have to be able to at least deliver that. This calls to question our state of affairs in the country, our ability to govern our country. This very generation of the leaders of Nigeria, including myself will be culpable if we do not open up and look at this thing objectively.