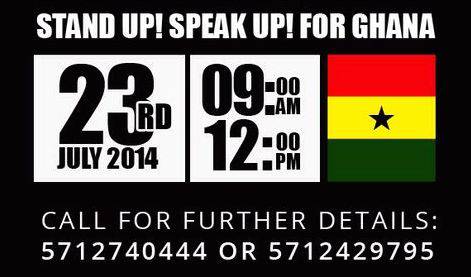 ‘Ghanaians Against Bad Governance’ (GABG) have announced their intention to stage a protest at their country’s embassy in Washington DC.

Occupy Ghana FlyerOccupy GhanaThis follows protests already held in the Accra, Ghana, dubbed #occupyflagstaffhouse which decried the economic hardships in the country. The aim of the protest, which is proposed to occur on Wednesday July 23 2014 at 9am local time, is to drum home concerns of Ghanaians living abroad on the state of the country’s economy, and the rising cost of living among other issues.

A press statement released by the group said, “the protest is in response to the present economic hardship in Ghana, which is a result of, but not limited to, economic mismanagement, misplaced priorities, well-intentioned but badly planned and corruption ridden social interventions, and the blatant violation of the laws and policies of Ghana by our leaders.”

The statement added that these factors have resulted in, ‘a high cost of living,’ a rapidly depreciating currency, high interest rates, energy, and water crisis, recurrent agitation by various labor organizations, and so on.

Kwaku Boateng, a member of the organizing committee told our reporter that since there is no substantive ambassador at the embassy, a petition will be presented to the Head of the Consular Affairs. The petition is to be relayed to President John Dramani Mahama. He extended an invitation to Ghanaians in the area, and all well-wishers to join the protest.

“We demand responsive and responsible governance to alleviate the plight of the good people of Ghana,” he said. He added that the group is ‘not interested’ in destabilizing the government or causing any problems for the president. But rather, drawing their attention to issues that, if checked, would make the country a better place for its citizens home and abroad.

Ghanaians Against Bad Governance is a non-partisan group of concerned Ghanaians living in the United States of America, who are interested in the economic and social wellbeing of Ghana. It is a diverse group of nonprofessionals, professionals, and academics, who believe that the Government of Ghana has a responsibility to deliver on their own promises.