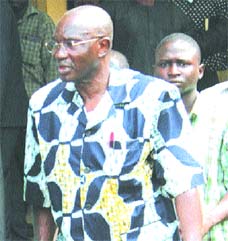 Sallah was celebrated low key and in a tense mood in Zuru, Kebbi State over the assassination of Mrs Saratu Bamaiyi, elder sister of retired Lt Gen Ishaya Bamaiyi, and her granddaughter.

In his sermon, Liman Sule Tanko at the GRA praying ground, Zuru, prayed for peace and security and the repose of the soul of Mama, as she was fondly called, and her granddaughter as well as those killed in the current insurgency in the North-East.

He called on worshippers to remain calm, be prayerful, vigilant and to live peacefully in their various communities.

The Police Area Commander, Zuru Area Command, Mr Abdu Wada, said security had been beefed up in the area.

“We have beefed up security with foot, motorcycle and vehicle patrol. People are going about their lawful businesses as investigation into the unfortunate killing of Mama and her granddaughter continues,” he said.

The State Commissioner of Police, Mr Ishaku Barau, while speaking to our reporter on Thursday night in Birnin Kebbi said the incident occurred between 3.00pm and 4.00pm same Thursday at her residence at Zuru Center (ZC), Zuru , in Zuru Local Government of the state.

He added that the 75-year-old Saratu was hit and killed with a pestle by unknown persons and her body alongside her 12-year-old granddaughter was dragged and dumped in a well.

“She and her granddaughter were murdered and then dragged into the well inside the house. I don’t think it was by the use of gun. They used a pestle to attack them.

“It appears not to be murder for robbery because she was having some money in her handbag, money from sales from her provision store outside the house.

“The bag containing the money was also dumped with the bodies inside the well. We also discovered wraps of money possibly for contribution in the house because she was a woman leader in the community. The unspecified amount of wrapped money was not touched.
“So that made us think that it was not robbery that led to that but probably assassination. But we are investigating the unfortunate incident,” the CP added.

General Bamaiyi could not be reached for reaction, as he was said to be out of town and was expected back for burial today.

Hon Bala Na’Allah, when contacted, expressed shock over the incident. “It is shocking and very disturbing to hear of such a dastardly act meted out to an innocent elderly woman and her granddaughter,” he said.