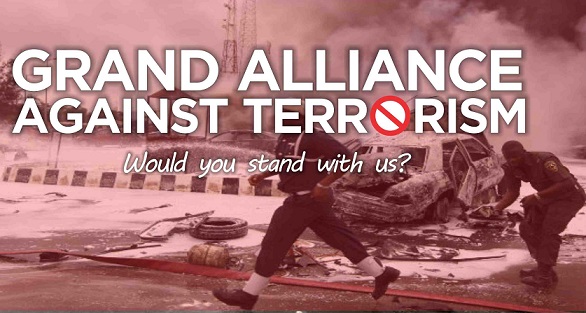 The Grand Alliance Against Terrorism (GAAT) is a non-partisan, non-governmental organization comprised of and led by concerned citizens. GAAT’s mission is to seek an all-inclusive participation in the fight against terrorism; drive citizen-response mechanism; support the victims of terrorism in Nigeria and show solidarity with our soldiers who are working with patriotism in harm’s way to fight insurgency.

We are committed to ensure that our jewels abducted by men of terror about 90 days ago are reunited with their families and our nation, safe and alive. We support every initiative by government, security agencies and sincere stakeholders to bring back our girls. This is one task that we must achieved as a nation to put terror to shame and defeat the axis of evil in our land.

We are urging all Nigerians to join in the crusade to achieve a national consensus in the fight against terrorism and make our society a peaceful one. Security is everybody’s business; we must support our security agencies and the government to overcome insurgency. While we explore both local and international cooperation to ensure that our kidnapped students are released, we must ensure that we put an end to adduction and kidnapping of Nigerians especially the girl-child and women.

As a group, we commend the presence of Pakistani Girls’ Education Campaigner, Ms.Malala Yousafzai in Nigeria and her sincere effort to ensure that our girls are released. We wish her Happy Birthday and express profound appreciation for using the occasion of her birthday to draw support for abducted girls in Niger. We urge Malala and other international stakeholders in the fight against terrorism to support drive a global consensus in fighting the act of terror in Nigeria. Since boko haram has keyed into global terrorism, we are convinced that international support for Nigeria is sacrosanct to block foreign funding for the insurgents. Fighting terrorism is beyond Nigeria alone, the world must support us.

GAAT has maintained straightforwardness and transparency in it activities. We have visited motor parks and markets in Abuja to distribute security tip and phone numbers as well as sensitization meetings. We have taken our advocacy to schools and different part of the FCT. We however, frown at methods being employed by certain individuals, groups and organizations which are creating unnecessary tension in the nation at a time when national unity should be at its peak.  Let us always remember the saying that United We Stand, Divided We Fall. Let us learn from the bitter experience of our past and other nations. We have no other home.

We wish to thank patriotic media men and women who have made national security a high premium in their reportage as we battle insurgency. The fight against terrorism is a collective responsibility and we urge you to remain vigilant and be on the part of Federal Republic of Nigeria to overcome our present challenges.