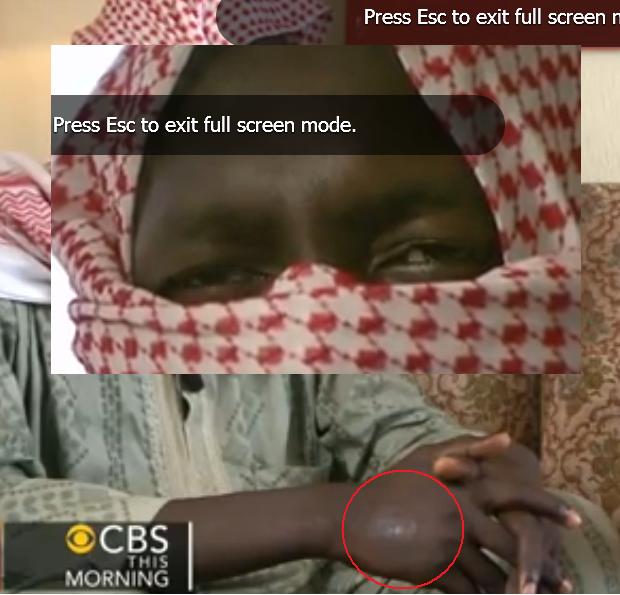 Look for his hand and face anywhere. he is about 5 foot 7 inches tall, dark skinned, average build with a conspicuous ‘burn’ mark on his right hand. He is Boko Haram and is anywhere in the nation, including Abuja.

A member of Nigerian militant group Boko Haram, responsible for the abduction of nearly 300 schoolgirls, tried to justify the targeting of children and warned of more kidnappings in an interview with CBS News. He calls himself Saleh Abubakar and claimed he’s been a member of the group for seven years.

“We see the enemies among the children, it’s acceptable to fire on all of them. You cannot differentiate the children,” Saleh Abubakar told CBS News contributor Debora Patta.

Although very nervous at first, Abubakar was brazen enough to walk though heavy security and police cordons to speak to CBS News. This was in line with what a source connected to the group had said, that Boko Haram moves freely around the country and is integrated into many levels of society.

Abubakar said the abduction of the girls was in planning stages for three months.

He claimed to have seen the abducted girls three weeks ago and said they are fine. When asked about reports of the girls being sick and requiring medical attention, Abubakar denied them.
“No, it’s lie. They don’t have problem at all,” he said.

He told CBS News nothing will happen to the girls as long as the government releases Boko Haram fighters being held in Nigerian jails.

He refused to say whether the girls had been moved across the border and claimed they would no longer be sold as slaves because they had all converted willingly to Islam.

The Nigerian Government said Boko Haram is linked to al Qaeda, but Abubakar would not confirm if al Qaeda funds their terrorist group.

“No, no, I am not going to tell you anything about this, but they are my brothers in Islam. Even in America, we have brothers,” Abubakar said.

For several days now there have been suggestions that some of the girls may be released, but there was no sense of urgency from Abubakar.

Sources say the government and Boko Haram are still trying to hash out a back door deal, but for the parents of the girls this will be of little comfort, as their children have been missing for five weeks now.