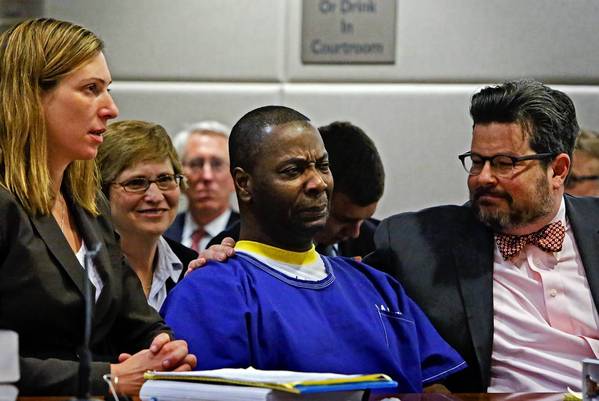 In 1979, Brenda Anderson testified that a young man with whom she had gone to high school shot her elderly neighbor to death. Thirty-four years later, Anderson’s sister Sharon took the stand and said the account, which helped send the young man to prison, was a lie.

On Thursday, a Los Angeles County Superior Court judge sided with Sharon Anderson and threw out the conviction of Kash Delano Register, who maintained his innocence during more than three decades as inmate No. C11693, according to the Los Angeles Times.

Register took his first steps of freedom just after 4:30 p.m. Friday. The 53-year-old exonerated inmate was transported from a Northern California jail to the Twin Towers Correctional Facility in downtown Los Angeles, where he left a free man, CBS Los Angeles reports.

“It was just an emotional feeling that just came out of nowhere,” Register said. “Finally, after 34 years.”

His release followed a Thursday ruling in which a judge overturned Register’s murder conviction in connection with the 1979 fatal shooting of a 78-year-old man in West Los Angeles.

“I lost my eyesight for a minute. I couldn’t see. I was so rejoiced,” Register’s mother said. “I couldn’t believe what I’d heard. That he had his freedom back.”


His freedom is due in part to Keith Chandler, a former inmate at Folsom State Prison and prison library clerk. Thirteen years ago, Register asked for Chandler’s advice.

“‘I need your help with the parole board,’” Chandler recalled Register saying. “‘I want to know how to explain to the board that I’m not crazy when I say I’m innocent,’ because he was being repeatedly denied parole.”

When Chandler was released from prison, he wrote a petition to get a judge to appoint Register an attorney.

Register ended up with a team of attorneys and students from Loyola Law School’s Project for the Innocent. They presented a new case, including testimony from Sheila Vanderkam, the estranged sister of one of the original key witnesses, who said she knew her sister lied during her testimony in Register’s trial.