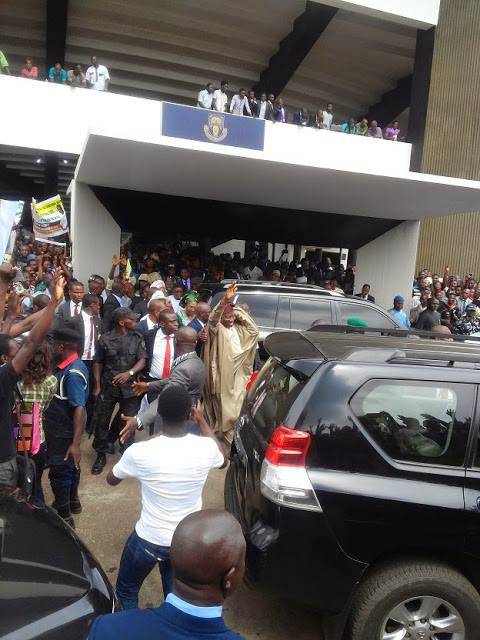 There was unrest on the campus of Obafemi Awolowo University, Osun State, southwest Nigeria, on Friday, 28 November, 2014 as students of the institution hauled stones and sticks at President Goodluck Jonathan during his visit to the campus.

President Jonathan, notable traditional rulers in the southwest and politicians had attended the Yoruba Unity Summit organised by the Committee on Yoruba Progress, southwest geo-political zone of the country where the president was endorsed for his re-election in the 2015 general election.

But the placard-wielding students of the institution who had converged at the Oduduwa Hall, venue of the conference to protest what they termed “rot in the educational sector” booed and stoned President Jonathan while entering the presidential chopper few minutes after the summit.

The irate protesters were shouting “ole” “ole” (“thief”, “thief”) at the president and other notable politicians who attended the event.

They displayed placards with inscriptions like: “We Condemn Jos Killing of Students, Students Are Not Chicken”, Don’t Sell Education As You Sold Electricity.”, We Demand Total Reversal of 2014 Hiked School Fees, We are Not Responsible For Jonathan’s Ineptitude.” among other inscriptions.

The students who were in their hundreds barricaded the road leading to the school’s sports centre where the chopper wearing the seal of the Federal Government and marked Nigerian Air Force, NAF-280, requesting that President Jonathan should address them before departing the campus.

In the ensuing unrest, the convoy of President Jonathan was delayed for few minutes as the students refused the President and his entourage passage to board the chopper despite pleadings by some security operatives.

Also, the Governor of Ekiti state, Mr. Ayodele Fayose who attempted to pacify the angry students was booed as students chorused ‘thief on him.

The vehicle conveying the Ooni of Ife, Oba Okunade Sijuade was not spared as students sat at the front of his vehicle for minutes before he was eventually allowed passage.

While the President was boarding the chopper, some students continue to aim pebbles at the chopper before they were dispersed by security operatives. although none of the thrown missiles touched the president.

Some students who had examinations also expressed their displeasure at the condition they were subjected to owing to President Jonathan’s visit to the campus.

President Jonathan being “smuggled”into his car as students boo him at OAU, Ile-IfeMost of the students had to walk long distance to their examinations’ venues as there was no vehicular movement on campus and its environs.

Meanwhile, a segment of the Yoruba people at the conference endorsed President Jonathan for a second term of office even as they urged him to help recover their political and social values.