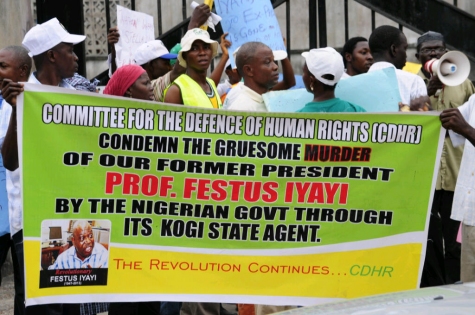 Civil society activists of the the Committee for Defence of Human Rights (CDHR) marched on Kogi State liaison office in Lagos to protest over the death of Professor Festus Iyayi caused by convoy of the state Governor, Idris Wada.

The protesters said the protest was necessary because Professor Iyayi was a member and former leader of the CDHR. CDHR blamed Kogi State Governor, Mr. Idris Wada for the death of Festus Iyayi. The members also insisted Federal Government murdered Iyayi through it Kogi State governor.

Click here to see pictures of his body with what appears to be gun shot wounds, front and back [WARNING]

The nature of two holes on the late Professor Festus Iyayi’s body gives life to suspicions by his colleagues that he may have been shot.

Along with grief, anger will be the dominant emotion when Professor Festus Iyayi is buried this week in his hometown, Ugbegun in Edo State. The two feelings have mixed, predictably with unsavoury outcomes, since the former president of the Academic Staff Union of Universities, ASUU, died on 12 November in an auto accident on the Lokoja-Abuja Expressway.

Iyayi was travelling to Kano in the company of three other ASUU members for a meeting on the ongoing strike by members of the union when a police escort van in the convoy of the Governor Idris Wada of Kogi State rammed into the bus the university teachers were travelling. Iyayi died instantly, while three his colleagues were seriously injured.

Wada, who was severely injured in an accident involving his convoy last year, was widely criticised by ASUU and the wider public for his failure to learn from his own experience and for allegedly failing to stop to assist the victims.

The escort vehicle was said to have veered off from its lane to hit the bus bearing the ASUU members, a claim the Kogi State government denied.

The Nigeria Medical Association, NMA, called for an official inquiry into Iyayi’s death and urged the Federal Road Safety Corps, FRSC, to curb the recklessness of official convoys. The FRSC also got a slice of the criticisms, following an accusation that it was shielding the driver of the vehicle that smashed into the bus conveying Iyayi and his colleagues.
One week after, ASUU dismissed the view that Iyayi’s death was accidental and forcefully contested the official claim that his heart was pierced by a strange object at the accident scene. The association pointedly blamed the death on the government and “its agents”. In a statement issued by the University of Benin chapter of the union, ASUU said Iyayi  did not die in an accident, but  was “wilfully” murdered. The union said it will demand concrete answers from the government for the alleged murder. It demanded that an autopsy be performed on Iyayi’s corpse and warned government officials to stay away from the burial.

“His burial should not be an avenue for government officials to score cheap political points, as we will resist any state involvement in the burial,” the union raved. Civil society groups in Edo State also demanded an inquiry into Iyayi’s death.

Was Iyayi murdered? ASUU believes it has what constitutes prima facie evidence to support its suspicion. Members of the union point to two holes, one in the chest and another in the back, as offering a less than complicated indication that Iyayi was shot. Photographs of Iyayi’s corpse obtained by this magazine, show holes that look like entry and exit bullet holes.

The Joint Action Front, JAF, a coalition of labour organisations, accused the government of masterminding Iyayi’s murder. A statement signed by its president, Comrade Abiodun Aremu, said the circumstances of Iyayi’s death are questionable.
The group believes that Iyayi was allegedly murdered to destabilise ASUU.
“We strongly believe that the assassination of Comrade Iyayi was carried out by expert shooters in the cover of the Nigerian intelligence, reminiscent of the state murder of Dele Giwa in 1986 and Kudirat Abiola in 1996,” the statement said.

Another on his back
JAF also alleged that the statement of Dr. Paul Amodu of the Specialist Hospital in Lokoja, where Iyayi was rushed to, did not adequately explain the piercing of Iyayi’s heart by a strange object.

Dr. Sylvester Akhaine, a Political Science lecturer at the University of Lagos, is similarly persuaded. Akhaine alleged that the accident was invented as a cover for the murder because ASUU’s struggles have made the government hot under the collar. He argued that there was nothing at the accident scene that could have drilled holes in Iyayi’s body. When told the coroner’s inquest did not support his claims, Akhaine retorted: “The coroner’s report is not the result of an autopsy. Until an autopsy is done, you cannot say anything to the contrary.”

Writing in THE NATION, Dr. Ropo Sekoni, a retired teacher of Comparative Literature, branded as incompetent Amodu’s claim that the piercing of Iyayi’s heart must have been responsible for his death. “What is this medical talk designed to achieve, a science-driven identification of etiology of death? Did Dr. Amodu’s observations derive from the result of a post-mortem examination?” Shekoni asked.

Dr. Ngozi Ilo and Dr. Sunny Iyalo, ASUU National Welfare Officer and  Zonal Coordinator respectively, who travelled with the deceased, also disputed the claim that a metal object at the scene of the accident was responsible for the holes on Iyayi’s body.

But how closely do the holes on Iyayi’s body resemble those made by bullets, especially given that the one on the chest looks big? A retired army colonel told TheNEWS that the holes have a high degree of consistency with those made by bullets. “There is a 70 per cent probability that the man was murdered and 30 per cent that it was an accident,” he said. If it was an accident, he argued, the impact would have caused a squeeze, not neatly drilled holes. He explained that a close-range shot from a pistol would cause the bullet to enter an object, as it allegedly did Iyayi, and exit through the back. “The big hole in the chest shows that it was a pistol. This is because the wound a pistol creates is bigger at the entrance and smaller at the exit. But if it was a Kalashnikov (AK47), it would be smaller at the entrance and bigger at the exit,” he further explained. The retired officer added that AK47 bullets gather momentum as they hit target, unlike pistol bullets, which create bigger impact at the point of entry.

“There is the possibility of shooting in the confusion of the accident or that the accident could have been contrived to cover up shots,”  the retired colonel told this magazine.

But did any of the survivors hear a shot before or after the crash? Not exactly, but they are not ruling out the possibility that a gun may have gone off on account of the impact created by the collision. This is because in all likelihood, the vehicle responsible for the accident had heavily armed passengers. “I heard the two vehicles collide. But given that it was a police vehicle, it is possible that, as we usually notice, cops in the escort vehicles of governors are always armed. So, anything could have happened on impact,” reasoned Anthony Monye-Emima, Chairman, University of Benin ASUU branch. If that was what happened, could Iyayi’s death be described as anything but accidental? Obviously not.

Lawyer and former university teacher, Professor Itse Sagay, urged caution. Sagay, who was sacked alongside Iyayi from the University of Benin by the military regime of General Ibrahim Babangida in 1987, said: “Nobody can pinpoint exactly what was responsible for the injury (the hole in the chest), which I believe killed him. There was no piece of iron or sharp-edged object found that could have done it. I believe the only solution to the problem is to have a very thorough autopsy to determine the cause of death and from there, one can then begin to build on what possibly could be responsible for his death.”
Sagay added that since there is no doubt that Iyayi’s death was caused by somebody in Governor Wada’s convoy, a case of murder or at the minimum, manslaughter, could be established.