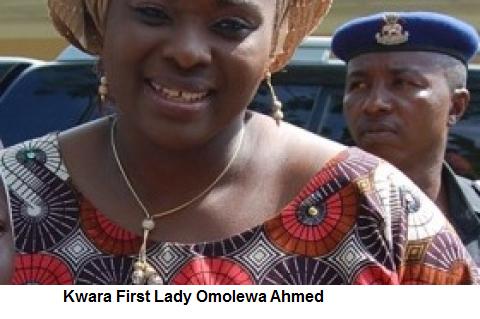 The killing of a female community leader by a trailer in Abule-Egba in Lagos on November 13 has been linked to the convoy of the First Lady of Kwara State, Omolewa Ahmed.

The community leader, Victoria Adeoye, 63, was killed when a tipper-trailer ploughed into bystanders as it tried to avoid a head-on collision with Mrs. Ahmed’s convoy, which was driving on the wrong side of the road.

Unconcerned, Mrs. Ahmed and her convoy of about seven cars abandoned the accident victims and sped on towards Abeokuta.  The Kwara First Lady was on her way from visiting popular Fuji musician, Kollington Ayinla, who was receiving treatment at Hamkad Hospital for an undisclosed ailment.

Eyewitnesses say the accident occurred when the fourth vehicle in the convoy was exiting the small road leading to the hospital.  Mrs. Adeoye and a roadside ice cream seller were killed.

In order to cover up the cause of the accident, authorities at Hamkad Hospital gagged their workers from disclosing their VIP guest, and swiftly moved Alhaji Ayinla to another hospital.

Mrs. Adeola’s son, Olusegun Adeoye, an Abuja-based  medical doctor, told SaharaReporters that Hamkad has refused to disclose the killers of his mother.

SaharaReporters however learnt from people in the area that although the plate numbers of the vehicles were covered, policemen in Mrs. Ahmed’s convoy had freely chatted with people in the area and disclosed they were from Kwara State.

It is unclear how he obtained those details since he was not on Mrs. Ahmed’s detail.

Asked why the First Lady’s convoy did not at least stop to assist the victims of the accident they witnessed even on compassionate grounds, he said she was only made aware of it after she returned to Ilorin, the state capital.

Eyewitnesses however, contradicted Akorede’s account, insisting that the accident happened as the convoy harassed motorists on the highway, causing the trailer to careen off the highway and then slam into several people, including Mrs. Adeoye who was at the bus stop on her way to Oshodi.

The Lagos State police also tried to cover up the cause of the accident by trying to use force to move the vehicles, until a mob prevented them from doing so.

The accident occurred within 24 hours after another a similarly reckless convoy of the Kogi State Governor killed Professor Festus Iyayi, a former Academic Staff Union of University (ASUU) President, on his way to an ASUU conference in Kano on November 12.