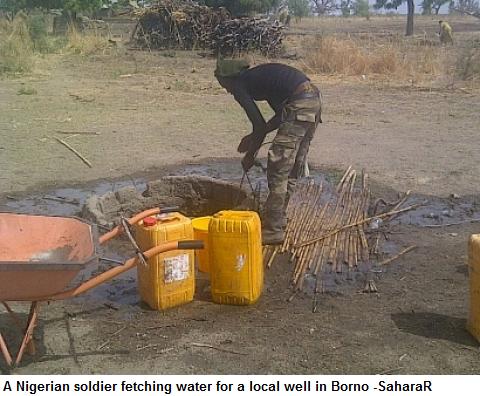 Nigerian soldiers who are in the forefront of the war against Boko Haram are increasingly disenchanted with their commanding officers as well as political authorities in Abuja, especially Minister of Defense Aliyu Gusau.

Over the past three weeks, SaharaReporters has interviewed many soldiers based in the Boko Haram hotbeds of Borno, Adamawa and Yobe States, and their views suggest a growing weariness about a war whose goals and strategies remain confused. The soldiers also said they welcomed the offer of help by the US, Britain, and France, adding that the use of surveillance equipment and human expertise from some of these foreign powers was likely to change the course and outcome of the long-drawn war that has claimed the lives of more soldiers than Nigerian authorities are willing to admit.

The soldiers’ main complaints have to do with their inferior and inadequate weapons, their poor equipment; their commanders’ seeming focus on making money rather than ensuring that the war is won; disregard for the welfare of soldiers, including the disrespect shown to soldiers who lose their lives in battle, and a lack of leadership from the Defense Ministry.

The soldiers as well as a retired general revealed that the low morale among the soldiers has led to increasing rate of soldiers who abscond from their posts.

“Can you imagine that Boko Haram has better guns than us,” said one of the soldiers based in Mubi, Adamawa State. “When they attack us at night, they have night vision goggles. They have rocket-propelled grenades. And they have vehicles and trucks that are new and very fast,” he added.

Several soldiers who serve in Izge, Borno State echoed the same view. Three of them stated that a February 13, 2014 attack on their base by Boko Haram insurgents illustrated the major handicaps under which they operate.

“The Boko Haram fighters started attacking our barracks about midnight. They came in two vehicles and totally took us by surprise. Their night vision goggles made it possible for them to see us, but we were firing back without being able to see them. Their attack went on from 12 to about 2 a.m.,” said one soldier. Another disclosed that the soldiers were forced to flee from the barracks because they could not match the insurgents’ firepower. In the end, Boko Haram killed nine soldiers and took away seven military vehicles, including one with 200 mortar bombs loaded in it.

The soldiers who spoke to us revealed that their commanders’ handling of the Izge attack pointed to serious lapses in the war on terror. They claimed that all the soldiers killed in the attack were wearing bulletproof vests and helmets, but that bullets easily pierced through the armor. “Why is it that they go and buy us bullet-proof vests and helmets that are fake?” one of the soldiers asked. A retired army officer in Abuja told SaharaReporters that there should be a serious investigation of the purchases of weapons and equipment for the country’s armed forces. “Our soldiers are exposed to serious danger when they go to war. Why should they be given tanks that explode when enemy fire hits it? Why should they be given bulletproof helmets that are punctured easily? I understand that these bad tanks and vests are purchased from China and other countries that specialize in manufacturing hardware that is substandard. The Minister of Defense and his officials and any military officers who took part in deciding on these purchases should be summoned to explain why they made these choices. And we need to know how much has been spent on these bad tanks and equipment?”

Nigeria’s Defense Minister, Mr. Gusau, who is a retired general, has maintained a curious silence in the weeks since Boko Haram insurgents abducted close to 300 schoolgirls from Chibok, Borno State. A correspondent of a British newspaper told SaharaReporters that a swarm of foreign correspondents in Abuja are amazed that Mr. Gusau, a close confidant of former military head of state, Ibrahim Badamasi Babangida, has refused all interview requests. “It is a highly unusual situation,” the British reporter said, adding that Mr. Gusau has even refused to speak to any reporters off the record.

Such silence is widely perceived as disturbing at a time when Nigerians and foreigners have serious questions about the preparedness of Nigerian soldiers deployed to fight Boko Haram as well as broader concerns about strategic choices made in the prosecution of the war.

Another foreign correspondent stated that some of President Goodluck Jonathan’s closest aides are quietly voicing displeasure with Mr. Gusau’s leadership. “Some of the president’s men have questions about what the military and the Defense Ministry have been able to do with their relatively lavish budget,” said the correspondent.

Battle-weary soldiers share some of the same concerns. Their comments in interviews revealed that suspicion is widespread among them that their officers and officials of the Defense Ministry are more interested in pocketing a chunk of Nigeria’s security budget, which tops $6 billion, than in defeating Boko Haram.

Some of the soldiers complained bitterly about their conditions, including the fact that most of them sleep in the open and on the dirt floor, that their meals are of poor quality, and that they drink water from wells that are infested with ring worms. The soldiers also claimed that their allowances are paid too late, and often not at all. They also stated that their colleagues who die in battle are hurriedly buried in shallow graves, often without even informing families about the death of their loved ones.

A case in point had to do with the nine soldiers who perished in Boko Haram’s midnight siege on the Izge barracks. One officer reportedly scolded soldiers for running away from the insurgents, even though, according to the soldiers, the officer was aware that they did not have the firepower to withstand the blitz. According to a soldier, the same officer “asked why should [the bodies of dead soldiers] be transported back to their people when they died retreating from the enemy.”

Several soldiers disclosed that such callous attitude has led to many soldiers absconding. “When you see how they treat those who die, then you know the same thing will happen to you,” one soldier said. They also claimed that the military and political authorities in Abuja often conceal information about the mounting military and civilian casualties from Boko Haram attacks.

One mid-level officer raised broader questions about the military’s response in the immediate aftermath of the Izge attack. According to him, the Nigerian Air force took to the air at 3 a.m., an hour after the fighting ended. “The pilot reported that he could see a convoy of nine vehicles leaving the area. They were Boko Haram’s two vehicles plus the seven vehicles they seized from us, including the one with 200 mortar bombs. The pilot was told to fire and destroy the convoy, but he said he did not have the capability to fire at night,” the source told SaharaReporters.

He added that the convoy was sighted again in the morning, but the Air force failed to destroy them. The source said he was disturbed that the military commanders did not come up with an emergency plan to destroy the vehicle with 200 bombs. “Mortar bombs can only be fired from a minimum distance of 3000 meters. With such bombs being possessed by Boko Haram, they can launch a long-range attack on any major target,” said the source. He added: “That’s why it should have been a priority to destroy the convoy with aerial power.”

Since the abductions in Chibok, questions have arisen about the response of the Nigerian military, with military authorities as well as President Jonathan claiming that the army launched a search for the abducted girls. However, the Izge-based soldiers told SaharaReporters that they never responded to the crisis. One of the soldiers said they were initially ordered on a mission to apprehend several vehicles apparently carrying the abducted students. “Just as we started the mission, another order came that we should pull back,” said one soldier. He added that local vigilante groups, not the Nigerian military, have led the efforts to find and rescue the abducted students. “I can assure you that nobody gave us any directives to look for anybody. No Air Force jets ever flew,” one military source said. He added: “Maybe President Jonathan gave orders to look for the girls. If he did, then maybe the commanders did not obey his order. If the commanders gave orders to look for them, then maybe the field officers did not obey. But I know that we were never mobilized to do any rescue.”

On the question whether Boko Haram insurgents have infiltrated the military, most of the soldiers we interviewed said they doubted that any fellow soldiers would offer information to the terrorist group. However, a few of them said they suspected that some of their commanders might have lines of communication through which they reveal military operations to the insurgent group.