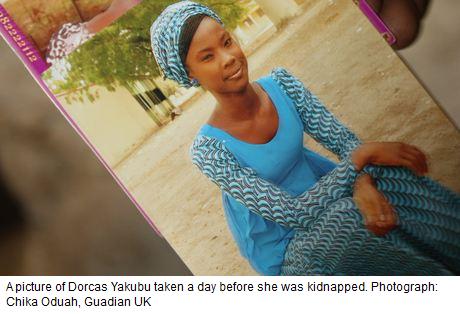 Chibok: the village that lost its daughters to Boko Haram

by Chika Oduah in Chibok

Asabe Kwambura is getting tired of waiting. Sitting under a young mango tree alongside the charred remains of her school, the headteacher looks around nervously. It’s not safe to be out here in one of the most dangerous parts of north-eastern Nigeria, but the government has promised to send a team to investigate the kidnapping of more than 200 pupils from her school and she wants to greet them in person.

Around her are abandoned desks and burnt out classrooms destroyed when Boko Haram militants stormed the Chibok government girls secondary school a month ago, loading the girls into lorries and driving them away.

Kwambura’s face is drawn and tired. The kidnapping has left its mark on everyone in this remote settlement, which has been living under a state of emergency since Boko Haram stepped up its attacks more than a year ago. 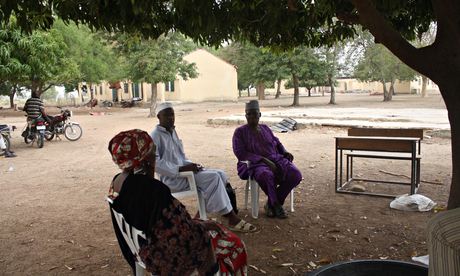 Yerima Pudza, Asabe Kwambura and Bulama Modu sit under a tree at the campus of the government girls secondary school in Chibok where over 200 girls were kidnapped. Photograph: Chika Oduah

Mohammed Dunoma, the chairman of the local parent-teachers association, says many villagers are now reluctant to allow their daughters to go to school. Boko Haram, whose name means “western education is sinful”, is an ever-present threat, he says: “We don’t know when they will come.”

This is a close-knit community, and it is in mourning. Esther Yakubu’s 15-year-old daughter, Dorcas, is one of the missing girls. She is furious with the government for failing to come to her aid.

“What about us living in Chibok? Are we not people too?” she asks. “They abandoned us. Just because we live in the villages.” Asked if she believes the rumours that the girls may have crossed the border into Cameroon and been forced to marry their abductors, she shakes her head vehemently.

“No, no. They are in Nigeria,” she says, holding a photo of Dorcas wearing a blue dress. The picture, taken the day before she was kidnapped, was supposed to be a gift to Dorcas for completing secondary school. 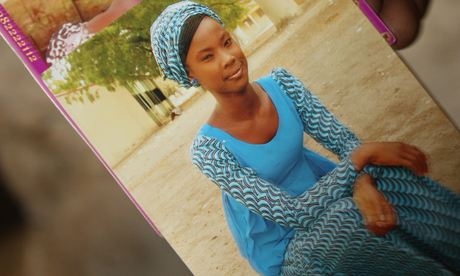 A picture of Dorcas Yakubu taken a day before she was kidnapped. Photograph: Chika Oduah

Dorcas’s sister, Happy, says she is not afraid of Boko Haram. “I just want my sister to come back,” she says.

Away from Chibok, the social media campaign to #bringbackourgirls has generated more than one million tweets and swelled into a global outcry, with famous figures including Angelina Jolie, Malala Yousafzai and Michelle Obama joining the calls for Nigeria’s government to recover the remaining girls.

But here there is no electricity or internet access, and little awareness that the world’s attention is focused at its door.

The oldest man in the village, Bitrus Dawa, known locally as Badalu, has not heard about the global search effort for the girls he describes as “my daughters”. Dawa, who says he was born in 1910 and can remember the first time he saw white men in 1923, shakes his head as he laments a government “fraught with corruption” that has not been able to eliminate Boko Haram.

Beyond the village, the wide trunks of baobab trees cast shadows across the Sahelian landscape where the Sambisa game reserve stretches ominously. Many Chibok residents believe their daughters are in one of Boko Haram’s encampments in the Sambisa bush.

“We went inside the Sambisa to look for them,” says Lawan Zanna. Hoping to find his 18-year-old daughter Aisha, the 45-year-old father of nine said he had joined more than 100 others three days after the abduction. Along the way, villagers from nearby areas told them they had seen Boko Haram militants with the girls.

Zanna said he wanted to continue following the abductors’ tracks, “But they told us told us, ‘don’t follow them. They will kill you’.”

Despite Boko Haram’s threats, Zanna says he will keep his seven daughters in school. “Even the Qur’an tells us that knowledge is obligatory.”

Since the abduction, Chibok’s local government has introduced a curfew, outlawing all driving after 6pm.

The village has deployed its own civilian force of fighters to defend the area. Bulus Mungo Park, a 38-year-old civil servant who says two of his nieces are among the kidnapped, is one of them. A volunteer in the national vigilante association, Mungo Park says the local force is about 300 strong. “We must fight this Boko Haram and we will win,” he says. 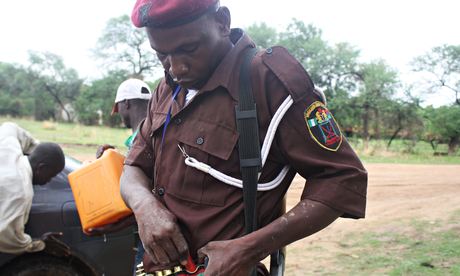 With a hunting gun strapped around his tall shoulders, Mungo Park escorted a convoy of girls who escaped from Boko Haram to the state capital of Maiduguri on Tuesday. Local authorities had invited them to watch the latest video released by the militants to help identify the girls shown.

The journey to Maiduguri from Chibok is an 80-mile (130km) stretch of abandoned villages razed by Boko Haram’s insurgency. Drivers on this road are careful to avoid stopping between the regular military checkpoints inspecting all passers by. At the checkpoints, soldiers and civilian fighters call out suspicious-looking men and ask them to stand in a line. One by one they lift the men’s fingers, looking for tell-tale signs of heavy gun usage.

“This is the situation we are in now because of the Boko Haram,” says Mungo Park.