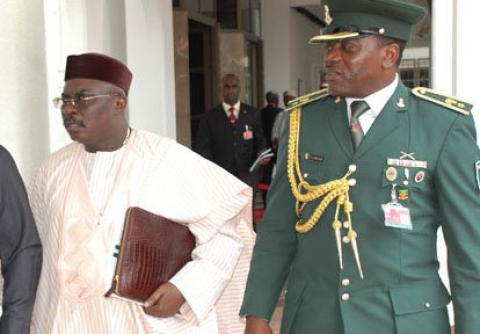 SaharaReporters has gathered that a huge dossier prepared on the activities of the erstwhile Chief of Staff of President Goodluck Jonathan, whom he fired today, revealed an extensive corruption profile.

But the former Deputy Governor of Edo State is unlikely to be asked to answer to any of them because Mr. Jonathan does not want to open a Pandora’s Box involving persons at the highest levels of his administration, analysts have told SaharaReporters.

Both companies are at the center of the $6 billion fraud cited by the Governor of the Central Bank, Sanusi Lamido Sanusi, in his recent revelation to the Nigeria Senate that the NNPC has not been able to account for $20 billion of the $67 billion worth of oil it lifted between 2012 and 2013.

Mr. Jonathan reportedly asked Mr. Oghiadomhe to resign after security agencies revealed his deep involvement, first, in a Rice waiver scam used to fund Mr. Jonathan’s Presidential Election in 2011; the security reports traced billions of naira to the duo, showing that they did not declare or remit a greater portion of the “profit” from the Rice waiver to the Jonathan campaign.

The campaign treasurer the was Ms. Stella Oduah, the current minister of Aviation, enmeshed in various financial and ethical scandals in her ministry.

In recent days, it also emerged that Mr. Omokore and Oghiadome benefited immensely from the N1 billion-naira-a-day Kerosene subsidy fraud.

Last week Tuesday, Omokore sent his wife, Angela, to meet with President Jonathan in order to explain that her husband did not partake in the fraud, but Mr. Jonathan appeared unconvinced as the CBN governor buffeted the nation with further revelation of massive fraud in the petroleum sector. Angela Omokore is Oghiadome’s goddaughter.

When the former Chief of Staff showed up for work at the Presidential Villa in Abuja this morning he was told to submit his resignation letter.  After complying, he returned to his residence.

He was not subjected to any questioning or surveillance, leaving him free to do as he pleases with his time and resources.

In order to fend off inquiries, presidential spokesperson Reuben Abati told some reporters today that Mr. Oghiadomhe “voluntarily resigned” to go and participate in politics.

The spin is aimed at deflecting public outrage that could force Mr. Jonathan’s hands in taking action against others involved in the NNPC fraud, particularly the Minister of Petroleum Resources,   Alison-Madueke.  She is currently reported to be “sick,” and is maintaining a low profile in far away London.

The challenge facing Mr. Jonathan is that, particularly in an election year, it would be impossible for him to claim that Mr. Oghiadomhe carried out his full briefcase of alleged corruption activities at the NNPC all the way from Aso Rock without the knowledge of the Minister, and that he has done all of it since 2010 without the knowledge of the presidency and the security agencies.

Mr. Jonathan is also likely to face questions as to why, each time a top official of his government is accused of corruption, he or she is at best removed from office, as has happened in the cases of Mr. Oghiadomhe and the former chairperson of the Economic and Financial Crimes Commission, Farida Waziri.

Most of the time, such an official is shielded from any investigation, as has happened in the cases of the Attorney General and Minister of Justice, Mr. Mohamed Adoke; the Minister of Aviation, Stella Oduah; Alison-Madueke, and now Oghiadomhe.

In recent times, Nigerians have increasingly accused Mr. Jonathan of boosting corruption and impunity in Nigeria by, among others, failing to take action against his corrupt officials.  Only yesterday, the Conference of Nigerian Political Parties called on Mr. Jonathan to institute a comprehensive investigation into corruption in the NNPC since 1999.

Ecstatic jubilation today swept Fugar, the home village in Edo State of the fallen Mike Oghiadomhe, and the youth there promise to gather again on Wednesday to pass a formal vote of no confidence on him.

Tuesday’s celebration started when news spread in the area of yesterday’s fall of their kinsman from the highest levels of the federal government as Chief of Staff to President Goodluck Jonathan.

Sources in the village told SaharaReporters that a group of youths gathered at a nearby area of the Etsako Central Local Government office to express their ‘joy and happiness’ over the removal of Oghiadomhe from the cabinet of Mr. Jonathan.

In an instant demonstration of the unpopularity of Oghiadomhe, who previously served as former deputy governor of Edo State, the youths were said to have been joined by market women, artisans, the unemployed, traders, students and motorcyclists, some of them dancing and singing.

Motorists plying the roads were said to have been locked in their cars as the crowds and their jubilations grew.

A lecturer at the University of Benin (UNIBEN) who was in the village for a meeting told SaharaReporters on the phone, “The street of Fugar was agog like a road show, with youths and market woman in their numbers dancing upon the news of Mr Mike’s removal”.

According to one of the youth leaders, Oghiadomhe’s presence in the presidency had attracted embarrassment but no federal projects to the area.

He said 80% percent of inhabitants and indigenes of Fugar welcomed his sacking and purported resignation, stating that on many occasions they visited him in his Abuja office but that the efforts yielded no gain.

“We visited his office in Abuja to table many issues concerning our community,” he recalled.  “He [would] promise us to come back. There are even times his secretary will tell us he is not the office and has travelled for official assignment.

“It was when we were tired of visiting Abuja and risking our lives that we settled for our faith. You will only see him visiting the village at night and leaving very early. This is bad for our so called politicians.  We even see him as stingy man who doesn’t joke with money,” he revealed.

Also speaking to our correspondent, a very angry woman in the village described the former President Chief of Staff as a “promise and failure man,” slang for a man who does not keep his word.

“No meaningful development entered this community during his reign as the Chief of Staff to Mr Jonathan, she said, and then breaking into pidging, added, “Na so so empty promises we dey hear. Common empowerment programme Oga Mike know do for his village.

Expressing happiness at his removal, she invited him to “come home and settle down instead of rubbishing us all on the name of representation at the Federal level.”

In addition to other corruption allegations already published by SaharaReporters, Oghiadomhe famously appropriated a large swathe of land belonging to some of the villagers in his area.